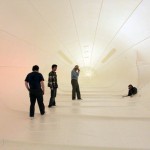 Inflation is something usually associated with bad news stories about the economy, but for University of Manitoba professor Dr. Barry Prentice and colleagues in St. Andrews and region, it’s something to be celebrated.

Prentice and cohorts conducted an inflation of an airship last week at the U of M, as a test exercise to identify and solve any problems that may arise during the process.

Prentice has spent the last decade researching using dirigibles, or airships, to haul freight to northern Manitoba communities, and now his project is finally getting off the ground, no pun intended.

“The airship takes up the entire main atrium. There’s no such thing as a small airship,” Prentice says with a laugh.

The 80-foot airship built by Buoyant Aircraft Systems International is the kind Prentice hopes will be used to supply northern communities which have to rely on wintertime ice roads and airplane re-supply. Prentice says that airships would present a reasonable all-season way to ship goods without having to spend hundreds of millions of dollars building all-weather roads to Manitoba’s more remote areas.

Because airships can get exponentially larger – unlike trucks and airplanes – and still only require the same amount of crew, Prentice says it presents a very cost-effective option for shipping as well.

With the help of researchers, volunteers and both Red River College and the University of Manitoba, has set up stop at St. Andrews Airport to begin testing with the prototype. 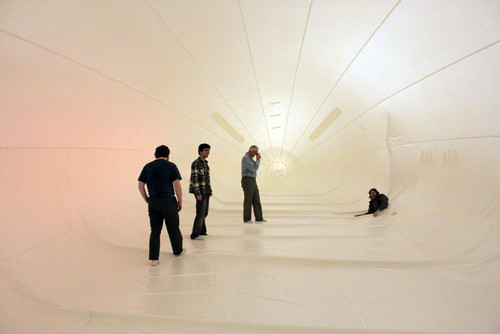 Dr. Barry Prentice and colleagues at the University of Manitoba take part in the inflation of their airship at the U of M.

But the hangar was recently damaged by high winds and won’t be repaired until next month, so the inflation took place at the U of M.

According to Prentice, if the testing phase goes well with the inflated airship, work will begin on a larger version that could reach 75 meters (246 feet) in length and have a cruising speed of around 130 km/h (80 mph). To begin with, though, Prentice and his team will restrict their flights to the area within the St. Andrews Airport.

“We’re making history almost every day here – there is no history of airships in Canada, per se,” Prentice says. “If we’re successful, this will be a milestone in Canadian aviation, and we’re so appreciative of the help and support we’ve got.”

He’s excited about an upcoming conference called Airships VI: A Game-Changer, to be held in Seattle in December.

The conference will examine how cargo airships will be a “game changer” for transportation. Shippers and suppliers will come together to assess the supply and demand potential for the use of airships in frontier logistics, including Alaska and Northern Canada.

Among the academics attending, the conference will also see companies in mining, oil and gas exploration, pipelines and northern/frontier logistics attend as well.

Airship manufacturers will also be present.

“This idea is being taken very seriously,” Prentice says. “There was a time when people looked at me like I had two heads when I started talking about this, but that’s not happening anymore. People aren’t laughing at this now. It can be done, all we need is enough support.”

It’s an idea that’s already spread to the St. Laurent area, where resident Luc Paul Fontaine is hopeful an airship hangar could one day be built.

“We have no history and no tradition of building airship hangars in Canada,” he said in a phone interview. “To start with, I would be interested in a building big enough for a 40 or 50 tonne transport aircraft.”

He says an airship that size would require a building roughly 30 meters high, by 60 meters wide, by 120 to 200 meters in length. “But those numbers are still very rough,” he said. “We need to hear from the companies building the airships and find out what they need.”