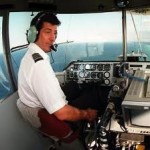 The widow of Balgownie blimp pilot Michael Nerandzic has accepted a rare industry medal for his gallantry and learnt new details of the air disaster that killed him.

More than 700 people got to their feet at London’s Guildhall to applaud Mr. Nerandzic’s sacrifice aboard a Goodyear airship in Germany earlier this year.

He had ordered his passengers to safety before the stricken blimp shot into the sky and was engulfed in flames with him still at the controls. 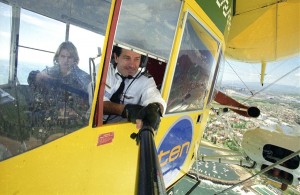 The late Mike Nerandzic flying over Wollongong in 1996 in the famed Whitmans Airship. Picture: KIRK GILMOUR

The medal, from the Guild of Air Pilots and Air Navigators, has not been awarded for more than 10 years.

Widow Lyndy Nerandzic learnt it was her husband’s deliberate actions that had earned him the honor.

‘‘When Michael’s award came up the whole place stood … they were banging the tables. People just kept coming up and asking if they could shake my hand.’’

Mr. Nerandzic was piloting the A60 Lightship Spirit of Safety 1, one of two airships leased by Goodyear for marketing flights in Europe for the summer.

It was coming in to land at Reichelsheim Airfield at 8.30pm on June 12 when it stopped uncharacteristically short of the group crew that would have weighted it down – odd because it had no braking capability.

A preliminary report by German crash investigators has indicated a landing wheel snapped off when it hit the ground. A part of the broken component pierced the full fuel tank.

Instead of completing the emergency flight procedures, he had helped clear filming equipment from the blimp’s exit door for two of his passengers.

He did this while balancing the airship – a task that had become more difficult in the critical final moments when a third passenger panicked at the sight of flames and jumped out the window.

As the fire began to take hold, his remaining two passengers were able to jump 2 meters to the ground, a Guild representative told the ceremony.

‘‘In deliberately assisting his passengers to jump clear of the airship, without any vital exchange of ballast, Captain Mike Nerandzic knowingly and selflessly put his passengers’ lives before his own.’’ 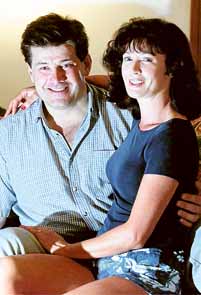 Mrs. Nerandzic said her mourning had been made easier by her brother’s family, who have moved from England to live with her in Balgownie.

‘‘After [the awards ceremony] I felt really upset and emotional. I’d been able to do things for him, get the body home, organize the funeral … when it was over I’d felt, what can I do for him now?

‘‘But you can’t sit around and be miserable when you’ve got four screaming kids in the house. They’ve been lifesavers.’’

Mrs. Nerandzic said further bravery awards were under consideration, including from the Australian Government.