Posted on September 23, 2013 by LighterThanAirSociety

Canada’s top balloonists will be floating over southern Alberta this week for the 2013 Canadian Hot Air Balloon Championships.

It’s the first time High River has hosted the national event since 1982 and a lot has happened to the town since the initial announcement was made back in March.

Severe flooding in June devastated the community and rebuilding is very much a work in progress. But there was little doubt the event was going to get off the ground, said Jamie Kinghorn, co-chairman of the organizing committee. 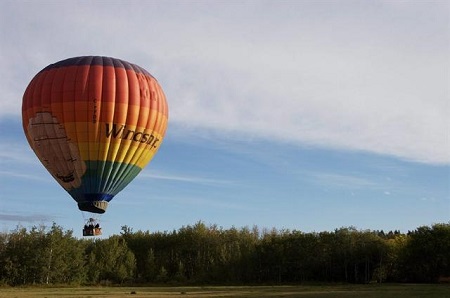 “Initially the first few days there were some questions asked and I got a lot of communication from pilots outside the area saying: ‘Are we still going to do it?'” Kinghorn said. “I talked to the board and the board was committed and we had a lot of volunteers from Calgary come out and they said: ‘Yes, let’s keep it going.'”

The championship begins Wednesday and runs through the weekend.

A total of 15 competitors from across Canada plan to take part. There are also five “fiesta” balloons planning to be at the event, including a Darth Vader balloon from Belgium.

Kinghorn is ranked third in Canada. He said the competition is not about speed.

“It’s all about navigation and the balloon meister will call a single task or five or six tasks depending on the conditions and he will tell us where an X will be somewhere,” explained Kinghorn.

“It may be on the ground but with the new GPS technology it might be 3,000 feet up and all the pilots must fly to the centre point and the closest to the centre of the X wins the task.”

The pilots aren’t informed of the goal until right before the race begins.

“The tasks are going to be such that the pilots are going to have to go about maybe five kilometers from town, find an appropriate place to launch and they’ll be flying into town,” said Kinghorn.

“We only travel as fast as the wind.”

The events usually take place shortly after sunrise or an hour or two before sunset because that’s when the west winds common to High River tend to die down.

As many as 10,000 spectators are expected to attend.

There’s a lot at stake, said Kinghorn, so the competition will be fierce.

“This is the world’s qualifier so there is a contingent of guys in this thing that are really bound and determined to go to the world’s in Brazil next year and they must win this event to have a seat at the worlds,” he said.

“There will be some very competitive pilots.”