Posted on September 23, 2013 by LighterThanAirSociety 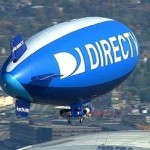 They rule the skies over every major sporting event.

Cruising majestically overhead, airships long have been an iconic symbol of the big game, patrolling the fairways of the PGA Championship, providing unique camera shots for the World Series, watching over the Daytona 500 and following the field action for countless Super Bowls. 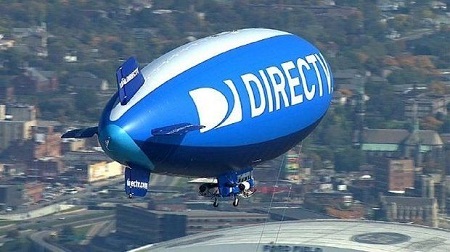 Airships like the DirecTV blimp, which provided aerial coverage during the 2013 Super Bowl in New Orleans, will not be seen over MetLife Stadium for the next Super Bowl because of weather concerns
Photo: DirecTV

But it’s unlikely there will be a blimp hovering over MetLife Stadium in New Jersey come February for this season’s Super Bowl XLVIII. Greg Poppenhouse, chief pilot for Goodyear, almost shivers at the thought of flying over East Rutherford on Groundhog Day.

“We won’t have a blimp up there,” he said of the upcoming Super Bowl. “We put our ship in the hangar in the winter.”

That’s because no one in a lighter-than-air craft ever wants to get into a snowball fight with the weather.

It’s not so much the cold that worries Poppenhouse, but what typically accompanies it during New Jersey winters.

Flying through a rainstorm in the summer can suddenly add 400 pounds of weight to a blimp, he noted. In the winter, though, that precipitation turns into snow and freezing rain, which can accumulate on the wide expanse of an airship’s helium gas envelope, adding enough weight to quickly give a blimp the flying characteristics of a brick. 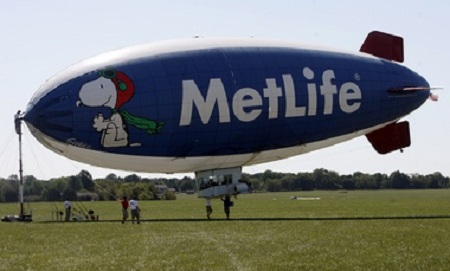 Snoopy One, the MetLife blimp, will not be flying over MetLife Stadium on Super Bowl Sunday.
Photo: Ed Murray/The Star-Ledger

Not even MetLife, whose name is emblazoned on the stadium that is home to the Jets and Giants, will chance its two U.S.-based airships — Snoopy One and Snoopy Two — to the uncertainties of the winter skies on Super Bowl Sunday this February.

“They won’t be there,” said MetLife spokesman Shane Winn. “Even if the weather was fairly decent, usually by mid-November both Snoopy One and Snoopy Two are put on a program that keeps them to largely warm-weather states.”

The white-and-blue Horizon Blue Cross Blue Shield blimp, which is based in New Jersey during the summer months, will be grounded by then as well, officials say, hibernating during the winter in North Carolina unless the airship is leased by another company.

Goodyear blimps were the first to offer regular sports coverage, company officials say, beginning with the Orange Bowl in 1960. Its airships, like others, now carry high-tech, gyro-stabilized television cameras suspended below a blimp’s gondola that can track sports action on the field, follow the flight of a golf ball or provide city vista shots during NCAA championship games.

Despite their reliance on blue skies, blimps are still considered effective marketing tools in an age driven by the internet. More than floating billboards, they command attention.

“We won’t have a blimp up there. We put our ship in the hangar in the winter.”

“It does a lot more than serve as an onboard TV camera platform,” said Toby Page, marketing director of the Orlando, Fla.-based Van Wagner Airship Group, which commands the largest fleet of airships in the world. “A big event is an even bigger event if it has a blimp present.”

Although the TV production units always want aerial shots, Page said the blimp itself often becomes an event separate from whatever sport it is covering, with landing parties, media flights, the involvement of social media and the opportunity to keep a sponsor’s name in the spotlight.

Van Wagner leases and flies airships to clients that include DirecTV and Horizon.

“There are only about 10 blimps flying in this country, so they are still pretty unique sights,” Page said. “Everyone remembers the blimp.”

It’s also a cost-effective tool for sponsors. A 30-second Super Bowl TV spot last year cost advertisers $4 million. When the Goodyear or DirecTV blimps provide aerial coverage for broadcasters, they work for free, in exchange for on-air mention and ground shots of the blimp.

“It’s a symbiotic relationship. They want aerial coverage and they give us promotional hits,” said Jon Gieselman, senior vice president for marketing at DirecTV, which is covering the NFL’s “Monday Night Football” game in Cincinnati. “It works for them and it works for us.”

Still, the DirecTV blimp, which was in New Orleans for last year’s Super Bowl, will be nowhere near New Jersey this time around.

“It was a nonstarter,” Gieselman said. “It’s too dangerous to fly. It wouldn’t be safe for the ship or the pilots.” 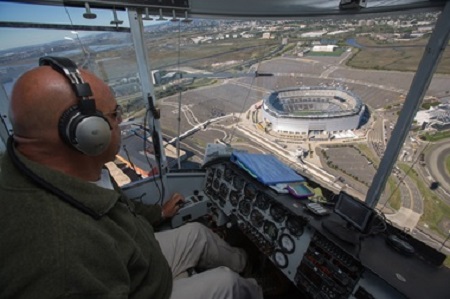 Blimps are very fair-weather creatures. They don’t fly in thunderstorms. The wind has to be 20 knots or less. And with a typical cruising altitude of 1,000 to 1,500 feet, a low cloud base will keep an airship on the ground. Snow and ice are the worst, making a blimp too heavy to fly.

Most airships usually head north around April and migrate back south or to California by November. The DirecTV blimp will be in Florida in February, heading down to cover the Daytona 500.

That means no banner planes or skydivers dropping in unexpectedly (like the famed pinpoint landing by parachutist Michael Sergio at Shea Stadium in Game 6 during the 1986 World Series between the Mets and the Boston Red Sox).

No one is saying anything yet about the other mainstay of the Super Bowl — the Air Force flyover during the national anthem. Although the F-16s flown by the Thunderbirds have little trouble in marginal weather, they were grounded for a time earlier this year in response to a far greater threat: budget cuts.