Posted on September 25, 2013 by LighterThanAirSociety 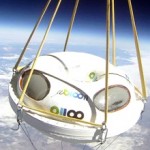 During the annual Space Generation Congress held in Beijing from the 19th to 21st of September by the Space Generation Advisory Council (SGAC), Space Safety Magazine met Lluc Palerm, a young engineer and winner of the “$pace is Business” competition where he presented an interesting paper on how microsatellites and the advent of microlaunchers could disrupt the satellite industry. Palerm currently works at Zero2Infinity, a Spanish start-up that is trying challenge Virgin Galactic and Space Expedition Corporation with an innovative idea on “space” tourism using stratospheric balloons.

How is Zero2Infinity planning to use stratospheric balloons for “space” tourism?
There are many companies developing Space Tourism capabilities with rockets but we are proposing a totally different approach. Since what people want to experience is the view from Space, we want to use high-altitude balloons. Four passengers and two pilots will smoothly ascend to around 36km. Then they will experience a cruise of between one and two hours before descending with a guided parafoil.

How much is the ticket for a flight?
Our pricing is in the same range as other space tourism providers – €110,000. However, the value that tourists get out of the trip is bigger. They will delight in a three-star Michelin menu while enjoying the view without having to worry about the noise, the accelerations, or the risk of a rocket. The cruise phase will last for at least one hour which is ten times more the time customers will be flying on a rocket.

Lluc Palerm is the winner of SGAC’s $pace is Business competition.
Photo: Zero2Infinity

Hundreds of people have already booked a ticket for Virgin Galactic’s SpaceShip Two. How many people do you think will take a tour with Zero2Infinity?

We already have customers as well; unfortunately I cannot disclose the exact number since a great proportion of our customers want to keep it confidential. In such completely new markets, it is very difficult to know how demand is going to evolve with time, but we are sure that pretty soon the market will be big enough to sustain various players operating at least weekly.

What are the safety concerns and safety devices employed in the manned capsule?

High-altitude balloons are really well known. There is a lot of experience about them since they were launched even before Space agencies got involved in developing rockets. They use helium, which is a noble gas that can’t ignite. The descent will be performed with a guided parachute, which again is a really well known piece of technology. The parachute will be pre-deployed, avoiding the most risky procedure in parachutes. All critical systems will be double-redundant. We are also working on the training of pilots and the definition of processes to answer to any eventual emergency situation. With all these considerations, we want to achieve a comparable level of safety to the one on commercial aircraft.

When we think about stratospheric balloons, we mostly think about Baumgartner’s jump. Have you learned something from Red Bull Stratos’ experience?

I think that for us it has been really beneficial because it gave a lot of visibility to what stratospheric spaceflight is. Now it is much easier to explain the concept since everyone is convinced that the view is the same at the suborbital space around 100 km. There is always room to learn from those doing similar things; and operating a high-altitude balloon launch is so complex that there are many fields from which you can get inputs.

This entry was posted in Uncategorized and tagged Space tourism, Stratospheric balloon, zero2infinity. Bookmark the permalink.