BBC takes Skyship across US for TV science experiment 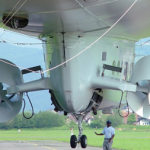 BBC Two is boarding a team of scientists onto the world’s largest airship – the Skyship 600 – for what is being billed as “one of television’s most ambitious experiments on the atmosphere.”

Flying from coast to coast, across the USA, in a month-long expedition for the BBC Two series Cloud Lab (working title), the team of British scientists will scrutinize insect life, the relationship between life and weather, as well as how hurricanes form.

The executive producer is Jonathan Renouf and it will be produced by James Van Der Pool. It was commissioned by Natural History and Science Commissioner Kim Shillinglaw. Cloud Lab will transmit on BBC Two next year.

The team of scientists, which includes an entomologist, meteorologist and professional explorer, is also hoping to shed light on the creation of clouds and the relationship between diverse ecosystems and weather. Their journey can be followed in real-time on twitter. 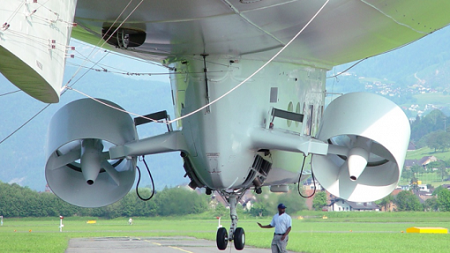 The airship is a unique platform for exploring the atmosphere. It can maintain a stationary position, so the team is able to watch weather phenomena develop, and then maneuver to get the best vantage point. It flies slowly and is exceptionally stable, making it the ideal base from which to conduct scientific experiments.

Cloud Lab series producer James Van Der Pool explains: “The 100 kilometers (62 mi) or so of air above our heads is all that separates us from space. It’s in every breath we take and makes Earth habitable. Yet for all its centrality to the health of the planet there’s a lot we still don’t know about the atmosphere. For instance, at what altitude does life cease? What type of air is most likely to cause rain? With Cloud Lab we’ve a rare and exciting opportunity to address some of these questions head on.”

Skimming the ocean’s surface and drifting with the wind allows the team to explore the physics that control the creation and destruction of cumulus cloud as well as using the Cloud Lab’s sophisticated technology to examine a growing cloud’s internal anatomy.

Through sampling different types of air, from sea, and desert to city, while simultaneously measuring cloud cover, the team will attempt to understand what types of air produce the most cloud.

During the trip, the entomologist will use the airship as a sampling platform to produce a unique survey of the insect life that lives above the USA. Bats will also be filmed using a range of technology, revealing how they have learned to exploit these insect superhighways.

Other experiments include researching the role of plants in maintaining the balance of the atmosphere through measuring the amount of oxygen produced by a forest. The team will also be looking into the causes of wildfires – the recent spate of which have claimed so many lives.

BBC executive producer of Cloud Lab Jonathan Renouf explains: “Flying across the entire North American continent by airship is ambitious in every conceivable way. As far as we know, no one has done this for two decades. It’s incredibly exciting because we will get to explore the atmosphere in a way that’s never been done before, as well as seeing America from a unique vantage point.”

For further details, including a route map and proposed schedule, read our earlier post on this project.

This entry was posted in Uncategorized and tagged BBC Two, Cloud Lab, Skyship 600. Bookmark the permalink.