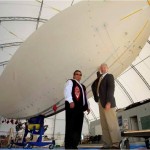 Hope shipments to the north could be reality in 3 to 5 years.

A week after a revolutionary, 80-meter (262.5 ft) hybrid cargo airship took its maiden flight at an old military base in southern California, Manitoba’s northern chiefs organization officially announced its support for the development of the technology in Manitoba.

With University of Manitoba transportation expert and airship visionary, Barry Prentice, at his side, David Harper, grand chief of the Manitoba Keewatinowi Okimakanak (MKO) said he believes hybrid airships could be a reality in Manitoba in three to five years.

Harper said MKO was approached by the federal government to partner with a group from Alaska that has held international conferences for the past three years.

The Cargo Airship conference to be held in Winnipeg in early October will feature airship developers from around the world, including Igor Pasternak, CEO of Aeros Corp., whose company was responsible for the brief airship test flight last week in California.

“We are not likely to see them in our lifetime.”

He said the idea of hybrid airships filled with lighter-than-air gases such as helium or hydrogen, which do not need an airstrip to land and little to no infrastructure, could have a dramatic effect on the economies of northern communities.

“Our people are also very interested in the environmental impact,” Harper said. “There’s no bulldozing or blasting required like there is in road building.” 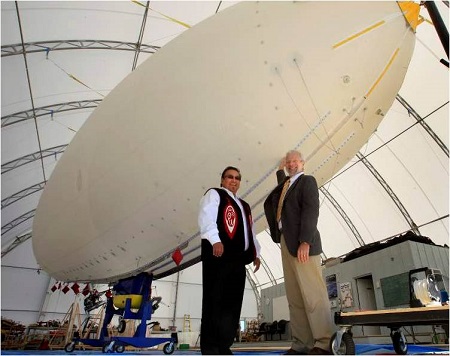 Harper and Prentice were at the only airship hangar in Canada, located at the end of an unused runway at St. Andrews Airport, owned by Buoyant Aircraft Systems International (BASI), a company started by Prentice and industrial designer Dale George.

Prentice said among other things, what would really kick-start serious technical development of airships would be the construction of a hangar big enough to fit a 60-meter-plus (197+ ft) airship.

Prentice and Harper both called for the need for government funding to help get the technology off the ground.

BASI has acquired the skeletons for a few small airships it will use for testing and research.

After more than 10 years of preaching the gospel of airships for northern cargo airlift, Prentice is firm in his belief the technology deserves a chance.

“We’re very pleased that the MKO is stepping forward and empowering First Nations people to actually give it a try and change their situation,” he said.

Development of any new technology is fraught with challenges, not the least of which is money to finance the development. Prentice said the rule of thumb is that it costs about $1 million per ton of cargo lift to build the airships.

BASI has a 20-meter (65.6 ft) unmanned airship in its 27-meter (88.6 ft) hangar and a couple of other airships that can be inflated in the future. These are small ships that would be used for research.

George said one of the ongoing challenges is the scarcity and cost of helium, which has turned some of the development efforts toward designs that will allow the ships to be inflated with hydrogen.

Hydrogen is flammable but George said non-flammable materials that would contain the hydrogen are readily available and it’s not a particularly challenging issue to overcome.

Prentice said because of the additional costs and time constraints in the use of winter roads, he believes airships can reduce the cost of food in the north by 20 to 50 per cent.

Click here for more information on the MKO Cargo Airship Conference 2013 to be held in Winnipeg in early October.