Posted on October 27, 2012 by LighterThanAirSociety 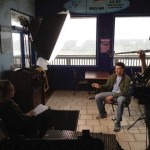 SEASIDE HEIGHTS — Seventy-five years after the Hindenburg disaster in Lakehurst, three people stood inside an otherwise empty beach bar to discuss the role the weather played in the airship tragedy.

Two members of a London-based production company directed Eric Fisher, a meteorologist with The Weather Channel, for a piece on the airship set to air on the network in March.

The segment, shot in Seaside Heights, Lakehurst and the Harmony section of Middletown this week, will air as part of a nine-part series called “When Weather Changed the World,” director Olive King said.

“The disaster wouldn’t have happened if all the elements didn’t conspire against the Hindenburg,” Fisher said. “All the things that could have gone wrong did.”

The pilots found thunderstorms, cold fronts and shifting winds at the Jersey Shore, and all those elements contributed to a delayed landing, he said. 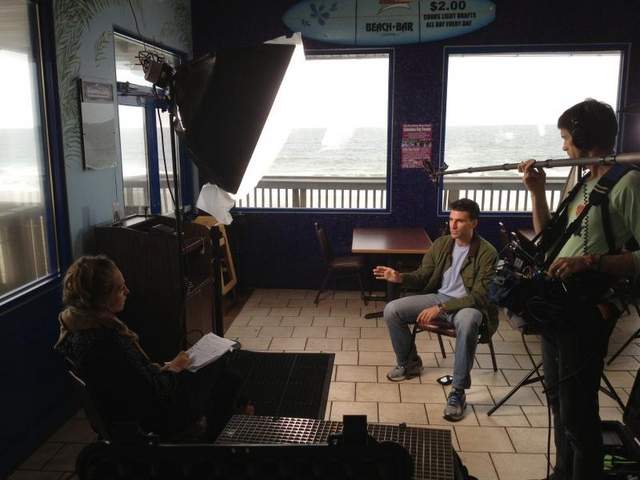 The Weather Channel meteorologist Eric Fisher (center) talks about the weather conditions in which the Hindenburg flew in 1937 for a segment on the ill-fated airship that will premiere on the network in March. Director Olive King (left) and production crew member Brian Copenhagen look on.
Staff Photo: Kristi Funderburk

During a Thursday morning shoot inside The Beach Bar on Seaside Heights’ boardwalk, they used a remote-controlled balloon shaped like a blimp, with Hindenburg handwritten in small letters on the side, to demonstrate the impact strong head winds may have had on the airship during its 1937 flight.

King explained that Seaside Heights’ location on the beach and proximity to the crash site made it an ideal shooting location.

“The Hindenburg on its final fateful journey flew over the New Jersey coastline. This is a nice coastline that’s also near the Lakehurst Air Base,” King said.