Posted on June 20, 2013 by LighterThanAirSociety 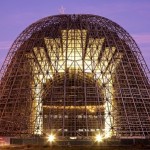 The U.S. General Services Administration on behalf of the National Aeronautics and Space Administration (NASA), has issued a Request for Proposals (RFP) to solicit lease proposals for the rehabilitation and adaptive reuse of NASA’s historic Hangar One, located at Moffett Federal Airfield (MFA) in the NASA Ames Research Center at Moffett Field, CA. The proposed long-term lease of Hangar One and MFA offers a unique opportunity for the private sector to collaborate with the government to reposition and manage federally-owned property for private and public sector reuse. 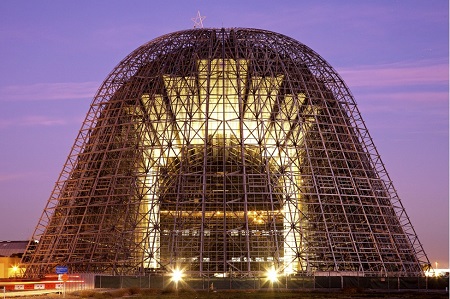 “Hangar One was the landmark of Silicon Valley well before the rise of today’s high tech titans. This effort allows NASA to work with the private sector to find a way to restore this treasure for more efficient use,” said GSA Acting Administrator Dan Tangherlini. “In the face of declining budgets and significant mission changes, NASA has been challenged to repurpose historic Hangar One and manage the airfield to support other non-NASA users. This competitive approach is designed create opportunities for development while eliminating NASA’s management costs of the airfield.”

Hangar One’s footprint is approximately eight acres with exterior dimensions of 1,140 feet long and 308 feet wide. It has approximately 350,000 gross square feet under the steel structure.  Due to contamination caused deterioration from the original siding, the Navy removed, but did not replace, the metal siding; leaving exposed the steel frame structure and coating it with epoxy. NASA has not been provided the necessary funds to install new siding to protect the exposed steel frame from the elements.

Hangar One was conceived and constructed from 1931-1933 to support the U.S. Navy’s “lighter-than-air” reconnaissance program following World War I. The Hangar was built for the 6,500,000 cubic-foot dirigible, the U.S.S. Macon.  However, in 1935, the U.S.S. Macon crashed off the coast of California due to a storm during a training mission.  This accident along with the crash of its sister ship, the U.S.S. Akron, effectively ended the “lighter-than-air” program.

Hangar One was used by both the Army Air Corps and the Navy in support of various mission objectives from 1935 until NAS Moffett Field was decommissioned under the 1991 Base Realignment and Closure (“BRAC”) process and transferred to NASA. Hangar One, along with Hangars Two and Three are contributing structures of the “U.S. Naval Air Station Sunnyvale, California Historic District,” which is listed on the National Register of Historic Places.

The Moffett Federal Airfield is approximately 1,000 acres and is operated and managed for ongoing Government and NASA partner needs.  The RFP process is seeking a tenant to operate, manage and maintain the station to support ongoing Government needs. The prospective tenant may act as a fixed-base operator to allow additional private airfield-related uses and propose other uses consistent with NADP and PEIS along with the historic preservation requirements identified in this RFP.

The planned long-term lease will utilize Section 111 of the National Historic Preservation Act of 1966, as amended (NHPA), which allows Federal agencies to enter into leases of historic property.

For the RFP and more information, visit http://historicproperties.arc.nasa.gov/hangar1

This entry was posted in Uncategorized and tagged Hangar One, Moffett Field. Bookmark the permalink.