Posted on March 14, 2017 by LighterThanAirSociety 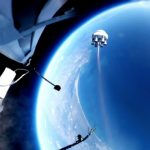 Zero 2 Infinity, a company specialized in Space transportation systems, successfully launched its first rocket from the Edge of Space on March 1st.

Part of the Zero 2 Infinity team sailed a few miles off the Spanish coast to launch the balloon carrying the rocket. After soaring to 25 km (more than twice the cruising altitude of commercial airplanes), the other part of the launch team gave the order of the controlled ignition of the first Bloostar prototype from the facilities of the National Institute of Aerospace Technology (INTA) in El Arenosillo (Huelva, Spain). 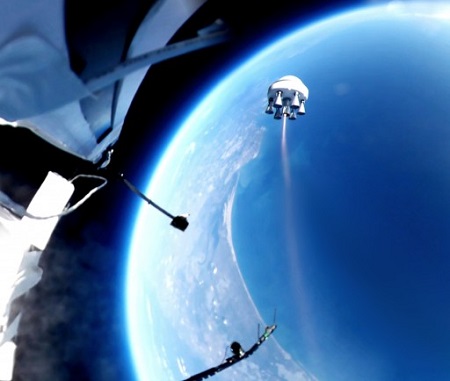 Launch of rocket from a stratospheric balloon.
Credit: Digital Journal

The goals of the mission were: (i) validation of the telemetry systems in Space conditions, (ii) controlled ignition, (iii) stabilization of the rocket, (iv) monitoring of the launch sequence, (v) parachute deployment, and finally, (vi) sea recovery. All these goals were achieved in full.

This mission is part of the development of Bloostar, the first small satellite launcher to use a stratospheric balloon as a first stage. By initiating the rocket ignition from above airspace, the targeted orbit can be reached with expediency and efficiency.

This patented technique is less risky than any systems used until now. The rocket-powered phase starts already from above 95% of the mass of the atmosphere, getting there with no polluting emissions. Besides the environmental angle, this new method lets Zero 2 Infinity launch satellites with more flexibility (2 weeks notice), at a drastically lower cost and more often than ever before.

From the day it was presented, Bloostar has attracted the attention of the leading satellite companies around the world. Zero 2 Infinity already has gathered upwards of 250 million euros in Letters of Intent for future launches.

The Space sector has become more open to private initiatives and is nowadays living a revolution. From global communication services to meteorological predictions, interconnection of machines through the Internet of Things and even the possibility of having a daily picture of the entire Planet. These advances have paved the way for the creation of hundreds of companies that need efficient and safe transportation services like the ones Zero 2 Infinity is offering and developing.