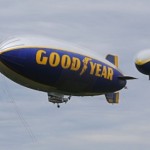 Goodyear formally retired its last GZ-20 model blimp, Spirit of Innovation, on March 14, 2017. Goodyear honored the tradition of the blimps, preserving many of the parts for historical display. The retirement continues the transition to a wholly modern fleet of Goodyear Blimps.

A Look Back on Her Career

Spirit of Innovation was christened on June 21, 2006 in Akron, Ohio, where it was built. President of International Speedway Corporation Lesa France Kennedy and Lynn Keegan, wife of retired Goodyear CEO, performed the official christening duties. The blimp operated at the Goodyear Airship Base in Pompano Beach, Florida from 2006 to 2015 and completed its career in Carson, California from 2015 to 2017. It was the first Goodyear Blimp ever to be named by the public through a “Name the Blimp” contest.

Wingfoot Two, the newest airship to join the Goodyear Blimp fleet will replace Spirit of Innovation in the Los Angeles market by the end of 2017 after the completion of the base renovations and facility upgrades.