Google Is Testing Its Internet Balloons in a Huge Freezer

Posted on June 17, 2015 by LighterThanAirSociety 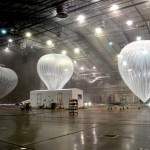 He works on Project Loon, Google’s ambitious plan to deliver Internet service from enormous balloons floating in the stratosphere.

When the company revealed the project in the summer of 2013, these polyethylene balloons stayed aloft for about five days. As part of Google’s effort to increase their flight time—and turn them into a viable way of getting underdeveloped regions online—Krishnaswamy runs what he calls The Leak Squad. Using everything from mass spectrometers to soap bubbles, these Googlers scour the balloons for even the tiniest of leaks and explore ways of changing manufacturing, shipping, and handling methods so these leaks are eliminated.

Typically, Krishnaswamy and his team examine and test the balloons in one of the iconic blimp hangars at Moffett Field, the old NASA airfield down the road from the Google X research lab in Mountain View, California. Hangar Two is one of the few places big enough to house these 30-foot-long balloons, and it happens to be in the neighborhood. A Google subsidiary is leasing the airfield from NASA so the company has a place to park its corporate jets and test things that don’t quite fit into an office.

But this week, on the two year anniversary of Project Loon, Krishnaswamy and his team are somewhere else. They’ve traveled to Eglin Air Force Base in Valparaiso, at the tip of the Florida panhandle. Eglin is home to McKinley Climatic Laboratory, a 55,000-square-foot hangar where the Air Force simulates extreme conditions like sub-zero temperatures, high-speed winds, rain, and snow as it tests fighter jets, bombers, helicopters, and such. Inside McKinley, Google is testing its balloons, exposing them to the kind of weather they’ll experience floating about 20 miles above the globe. 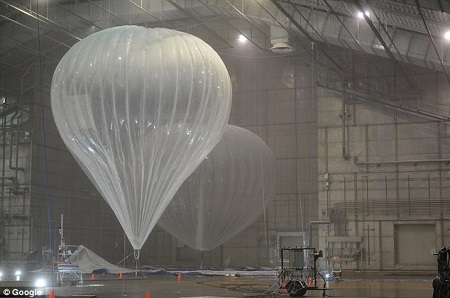 “It’s a hangar the size of Moffett—except it can go down to -60 degrees,” says Krishnaswamy. “It’s a giant freezer in Florida.”

These tests are another step in the rapid evolution of the unexpected and surprisingly effective Project Loon. Google can keep its ballon aloft for months—one flew for 187 days—and collectively, they’ve traveled a total of more than 16 million kilometers. Engineers have navigated the balloons within 500 meters of a target from 20,000 kilometers away, and Google can now send wireless signals between the balloons, daisy-chaining an Internet connection across the sky. The company estimates that, using these balloons, it can send an Internet signal from a telecom base station to phone users hundreds of kilometers away (about twice the width of the state of California).

The project is part of wider effort to create technologies capable of delivering Internet access to remote corners of the world. Facebook is building flying drones that can stream the Internet to earth, while Elon Musk’s SpaceX is apparently exploring the use of satellites. The hope is such systems can reach developing countries with greater ease and lower cost than traditional tech like wirelines and cellular towers.

But as Google shows with its trip to McKinley—after sitting for two-years on a waiting list at the Air Force facility—these projects have their own hurdles.

One reason the balloons now stay aloft for well over 100 days, Krishnaswamy says, is his team has been relentless in finding and eliminating leaks. At McKinley, they’re taking these tests even further. “We’ve never been able to look at the balloon in the cold,” Krishnaswamy says. “This allows us to get up close and personal at these temperatures…The idea is to try and get a good understanding of how the materials behave.”

According to Jeremy Straub, a PhD candidate at the University of North Dakota who specializes in high-altitude balloons and other aeronautical equipment, this can certainly help the evolution of the balloons. But he also points out that there are so many other problems to solve before a commercial Internet service provider like Vodafone or Telefonica can use these balloons as economically viable means of delivering Internet access. “There are so many factors that make this difficult,” he says, “especially if you need economies of scale.”

A Google Balloon is launched in Brazil.
Photo courtesy of Wired/Google

To help reach that point, Google also is working to streamline the launch of its balloons. At the beginning of the project, the company needed 14 people and 45 minutes to get one aloft. But as Bloomberg recently reported, Google has built a kind of portable hangar that blocks the winds and uses a crane to stretch the balloon out and fill it with helium before launch.

Using this contraption, called the Autolauncher, says Project Loon engineering lead Paul Frey, just four people can launch a balloon in 15 minutes. The trick is the crane, one inspired by those that pull boats from the water onto a dry dock. Previously, Google needed humans to stretch out the balloon before it was inflated. Now, the crane can do most of the work. “It simulates the launch process we used with humans, but it does this more automatically,” Frey says.

At the same time, Google continues to improve the balloons’ ability to navigate winds encountered at high altitude. Tapping into years of data from the National Oceanic and Atmospheric Administration, or NOAA, the company can simulate weather patterns and, to a certain extent, predict how the winds will blow. “We can forward simulate and check where the balloon is going to go,” says senior software engineer Johan Mathe. Then they can adjust the altitude as needed. The balloons, you see, are really two balloons in one. The primary balloon is filled with helium, and there’s an internal balloon in which engineers can remotely add or remove ambient air to move the thing up and down.

Rhode Island and Beyond

Of course, the aim isn’t just to keep the balloons aloft but to use them as a means of getting a signal to mobile devices here on the earth. With its first prototypes, Google was merely able to send an Internet signal to the balloons via Wi-Fi. Now, it’s also sending signals between balloons, and using the balloons to blanket wide areas with an LTE signal, the same type smartphones tap into via ordinary cellular towers. According to Frey, each balloon can now provide a signal that would cover Rhode Island.

But the company isn’t interested in covering Rhode Island. It’s interested in covering the parts of Africa, Latin America, and Southeast Asia that lack Internet access. About two-thirds of the world’s population is not online, and Google, like Facebook, wants to change that. If more people are online, more people will use Google. The value of this phenomenon shouldn’t be underestimated. Google is going to extreme lengths in its effort to extend the reach of the net. It’s building balloons and cranes. It’s trying to predict the weather. And it’s camping out in an Air Force freezer, at sub-zero temperatures.