Posted on November 14, 2013 by LighterThanAirSociety 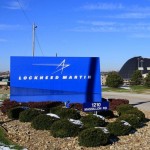 By Jim Mackinnon and Katie Byard

Lockheed Martin Corp., which took over operations in the city that date to Goodyear Aircraft decades ago, announced plans Thursday to shutter the facility along with four other operations around the country. 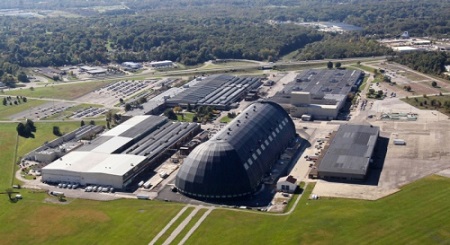 One footnote in the announcement widely called “sad news” for Akron was that some work will be continued at the landmark Airdock. The Lockheed Martin operation is spread among buildings nearby.

About 4,000 workers nationwide, including about 500 people in Akron, are expected to lose their jobs starting next year and into 2015, Lockheed Martin said.

entrance of Lockheed Martin with the air dock in the background Thursday, in Akron. announced Thursday that it will shutter its Akron plant and some other operations around the country. About 4,000 workers, including about 500 positions in Akron, are expected to lose their jobs.
Photo: Karen Schiely – Akron Beacon Journal

Employees and local public officials reacted with sadness and anger, saying the loss of high-paying jobs will be an economic blow to the region. Some, including the property owner, held out hope that new tenants will quickly be found to fill the sizable property next to Akron Fulton International Airport once Lockheed Martin moves out.

Akron Mayor Don Plusquellic said in a news conference there are businesses that are “beating down our door” and interested in locating here but have been unable to because of a lack of existing manufacturing space.

“I know it does not give comfort to the 500 families affected or the loss of wealth, but it does mean that we can still operate out of the site and fill it with other companies and employees,” Plusquellic said.

Lockheed Martin, headquartered in Bethesda, Md., said it is making the moves “to increase the efficiency of its operations and improve the affordability of its products and services” in the face of “continued declines in U.S. government spending.” About 82 percent of the defense giant’s 2012 revenue of $47.2 billion came from the federal government.

“With the exception of the Akron Airdock, operations in Akron are planned to close by early 2015,” Lockheed Martin said in a statement.

Work possibly will be moved to Owego, N.Y., and Orlando, Fla.

The company said about 500 of its 600 workers in Akron will be affected. It said the Akron closure “is expected to save millions annually and reduce the company’s footprint by 677,000 square feet.”

This entry was posted in Hangars and Sheds, News and tagged Airdock, Lockheed Martin. Bookmark the permalink.