Posted on July 3, 2015 by LighterThanAirSociety 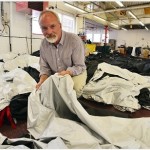 Production of the world’s first solar-powered hot air balloon is now under way in a Bristol factory.

After years of research, the Cameron Balloons factory in Bedminster revealed the materials yesterday.

The panels of 1,600 square metres of fabric, made from polyurethane-coated nylon, will be stitched together this week.

The balloon will be the first solar-powered aircraft in the world certified to meet safety requirements for operation. 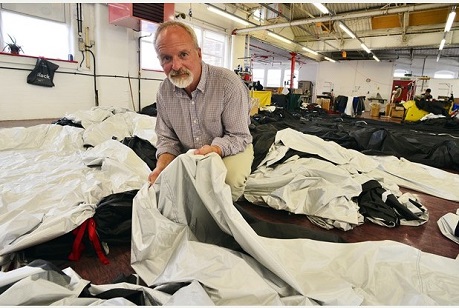 Panels of fabric are sewn together marking the start of production of the solar hybrid hot air balloon at Cameron’s Balloons in Bedminster. Pictured – Nick Purvis.
Photo by Dan Regan

It is partially powered by the sun with backup from a conventional propane burner, which is also used for takeoff and landing.

The balloon will make its debut flight at next month’s Bristol International Balloon Fiesta, to help mark Bristol’s year as European Green Capital.

Nick Purvis, of Cameron Balloons, said: “We’ve finished an intense period of testing the model and we’re now in a position to start production of the full-size hot air balloon.

“The concept for the design is relatively basic but hasn’t been done on this scale before, so in order to get to this stage we’ve had to try different fabrics, techniques and ways of adjusting the heat inside the balloon so we can create a certified aircraft that has longevity and isn’t just used experimentally.”

He added: “It is likely that it will go smoothly because the principle works, so we are all optimistic.”

A total of ten people have been involved with the making of the balloon – Nick, a chief engineer, an adviser, a balloon designer and people to work on the cutting, graphics and seams.

By the time the balloon is ready to fly, over 200 hours of manual labour will have gone into it. One side of the balloon will be silver to reflect the heat and the other side will be black, to absorb it.

There will also be specially placed holes to allow for hot air to be released. Bristol 2015 is funding the project.

Chairman Andrew Garrad, said: “I am very much looking forward to celebrating its maiden voyage in August and hope that this project will inspire many more firsts for Bristol.”

Work on the balloon is expected to be finished by the end of the month.