Posted on June 29, 2015 by LighterThanAirSociety

Reported in Scientific American, This Week in World War I: June 26, 1915

After the First World War broke out, airships quickly became a scourge. German Zeppelins bombed Liège and Antwerp in Belgium and perhaps hastened the fall of those two cities even though there were few casualties (as we understand such things in our more dismal era).

Early in the war some airships had been brought down by anti-aircraft fire, but if the airship flew high enough, ground fire was not a threat; defending aircraft took far too long to climb to a high enough altitude to find (usually in the dead of night) and attack an airship. The greatest effect of the Zeppelin was not in the damage they caused as much as the psychological novelty of being able to cross defensive lines at will, float high above a city, and rain down bombs with impunity. After the airship campaign against Britain started in January 1915, the government had to devote considerable resources to fight this perceived menace. (In reality, the more common and frequent role of the airship was reconnaissance, particularly at sea.) 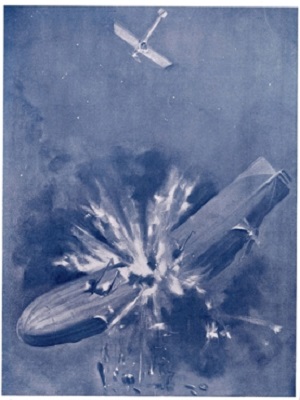 An Allied aviator drops a bomb on an airship, completely destroying it, in this painting from 1915 based on events.
Image: Scientific American, June 26, 1915

The learning curves for both sides were steep, however. In the first year of the war, and until the advent of incendiary ammunition for machine-guns, airships proved highly vulnerable to weather; but in 1915, finding and destroying Zeppelins proved to be an almost impossible task.

The cover of the June 26 issue illustrates the first successful destruction of a zeppelin by an airplane. Reginald “Rex” Warneford of the Royal Naval Air Service, flying a Moraine-Saulnier airplane, had taken off on June 6 from an airfield in Belgium with a load of six bombs for a bombing raid on, ironically enough, airship sheds. Spotting airship LZ37 he attacked, was driven off by machine-gun fire, but gained enough altitude to swoop down on the airship, dropping a bomb on it and destroying it. Warneford’s airplane was damaged by the explosion, forcing him to land behind enemy lines. He managed to repair his aircraft, restart his engine, take off and fly back to his base. This remarkable display of skill and coolness (and also a demonstration of the inherent vulnerability of the slow, hydrogen-filled Zeppelin) resulted in an award of the Victoria Cross, Britain’s highest award for bravery, to Warneford. (Warneford died a few days afterward in an airplane accident.) 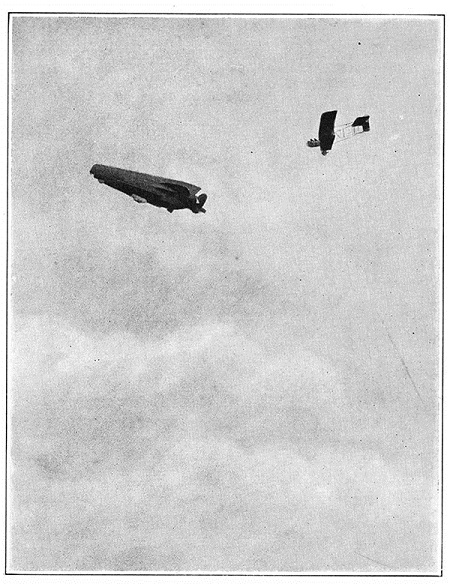 A French airplane attacks a German airship, in this photograph from 1915.
Image: Scientific American, June 26, 1915

Here is the description of the event from the June 26 issue of Scientific American (it starts off with an oddly racist comment that attempts to distinguish Germanic from Celtic heritage):

“In this experimental air-war the brilliancy of the Celtic mind has scored heavily. The recent destruction of a Zeppelin by a light high-powered French monoplane, piloted by a daredevil Canadian, who barely escaped being hoisted by his own petard, is a striking instance …. From the accounts it also appears that this Zeppelin carried only a machine rifle, leaving behind its cannon, and it seems more than doubtful whether the latter was so mounted as to sight with ease and quickness vertically at a bomb-dropping aeroplane. Evidently this Zeppelin succumbed to what has so far proved the most deadly sort of aerial attack—swooping like a hawk with a racing machine and throwing bombs at so close a range that they cannot miss (the writer advocated this five years ago in the Century Magazine) . These tactics had often proved their value against the ground ; high up in the air they are still easier, because the swoop may there be continued past its objective.”