Save the Date: August 1: A special program commemorating the loss of the USS Shenandoah

Posted on June 22, 2015 by LighterThanAirSociety 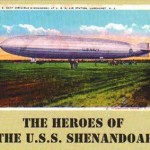 On August 1, 2015 at 11:00 AM, The Lighter-Than-Air Society will present a free program titled “The Heroes of the Shenandoah” in the Auditorium of the Akron-Summit County Main Library, 60 South High Street, Akron, Ohio. Free parking is available in the adjacent High & Market Deck, across from the Akron Art Museum (see map below).There is direct access from the parking deck to the Library.

Also, The Lighter-Than-Air Society will have a display of artifacts and other items from its collection relating to the USS Shenandoah.

In the early morning hours of September 3, 1925, the Navy airship USS Shenandoah was torn apart in a violent storm and crashed in the fields of Noble County, Ohio. Of the 43 men on board, 14 died and 29 survived.

The stories of the ill-fated crew and those on the ground who stepped forward in the crash’s aftermath are told in the compelling “The Heroes of the USS Shenandoah” by Judi Tarowsky, storyteller. This carefully researched program follows the story of the U.S. Navy’s first rigid-frame airship from its ambitious construction to the dramatic details of its last flight. As Judi says in the story, “When Man challenges Nature with what he thinks he knows, Nature often takes another view.” The program runs 45 minutes and is suitable for audiences ranging from middle school to adult. 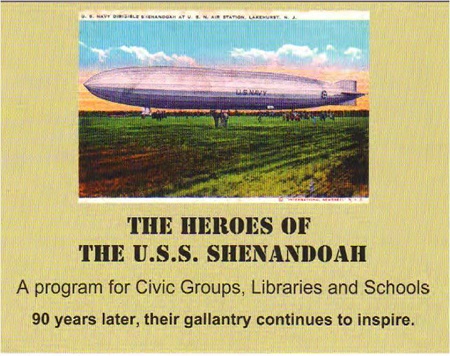 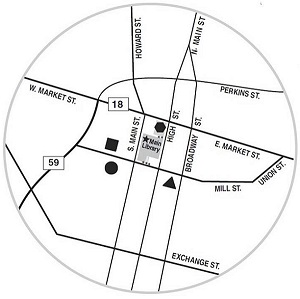 Judi Young Tarowsky graduated from West Virginia University with a bachelor’s degree in journalism and began her career with The Intelligencer in Wheeling, eventually working for The Herald-Star in Steubenville, OH and The Wheeling News-Register. She received the Graduate Certificate in Storytelling in 2010 from the University Of North Texas School Of Information Sciences. She has written articles for “Firehouse” magazine, “Gun World,” and “Pittsburgh Magazine.”

She was an adjunct instructor at West Liberty State College (now University) in West Liberty, WV, where she taught public relations writing and public speaking. In 2008, Tarowsky started her own company, Red Horse Writing Service, Ltd. and began study to become a professional storyteller.

Her credits include winning “The Golden Shovel” as the first-place winner in the Inaugural Annual Strand Theatre Story Telling Festival Adult Amateur Liar’s Contest in 2006, and winning “The Silver Shovel” as second-place winner in 2007. Her work appears in the digital web concert, “Spinning Yarns Storytelling Concert,” presented by UNT. She is president of the West Virginia Storytelling Guild and a member of the Ohio Organization for the Preservation of Storytelling.

Judi performed as a local teller at the Three Rivers Storytelling Festival in 2010-2014, held in Pittsburgh, PA. She has also performed at the Vandalia Gathering in Charleston, WV, the West Virginia State Folk Festival in Glenville, WV, the Gaslight Theater in Sistersville, WV, the Martins Ferry Public Library and its Belmont County (Ohio) branches, the Brooke County Public Library in Wellsburg, WV, and at the Cockayne Farmstead in Glen Dale, WV. She has been the featured speaker at the Arthurdale Heritage Site in Arthurdale, WV and at the Ohio County Public Library in Wheeling, WV.

She was a teller for the First Fridays Haunted Trolley Tours in Wheeling, WV; WVU Mountaineer Week Tellebration in Morgantown, WV. Along with Rich Knoblich, she co-chairs and performs at the Pricketts Fort Storytelling Festival and Grand Vue Park Storytelling Festival.