What will become of blimp hangar? Tustin searches for developer to create ‘urban village’ at site

Posted on November 4, 2015 by LighterThanAirSociety 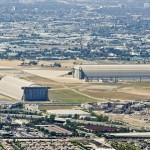 Plans are advancing to give one of Tustin’s historic blimp hangars new life, as part of an “urban village” in the heart of the Tustin Legacy community.

The City Council will vote Tuesday night on an exclusive agreement with OliverMcMillan – which helped redevelop San Diego’s famed Gaslamp Quarter – to draft plans for a mixed-used project that will incorporate the 73-year-old former military hangar.

The company wants to build up and out along a grid of short, walkable blocks, according to John Buchanan, Tustin’s deputy director of economic development.

“It’s a joint effort to come up with a plan that not only is pedestrian friendly and an exciting place to be, but also we want to make sure it’s financially feasible,” Buchanan said.

The project is proposed for the former Marine Corps Air Station, between Tustin Ranch Road and Armstrong Avenue, north of Warner Avenue up to the logical extension of Moffett Drive. It does not include the northern hangar, which Orange County controls and also hopes to one day redevelop.

The surrounding area has long been discussed as a potential site for a baseball stadium that could host the Angels if the team is unable to settle ongoing disputes over its lease in Anaheim.

The OliverMcMillan proposal specifically mentions the potential for “sports-based uses.” While the Angels chatter continues, Buchanan said other venues have also been proposed.

“I think what we tried to do is keep it open, whether it’s baseball or soccer or something else,” he said. 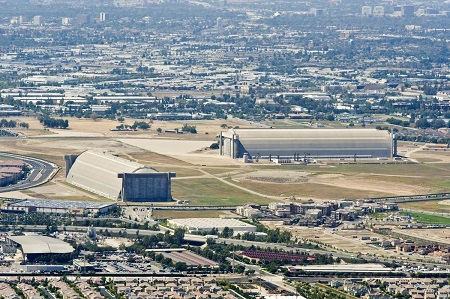 Plans are advancing to give one of Tustin’s historic blimp hangars new life, as part of an “urban village” in the heart of the Tustin Legacy community.
Photo: Joshua Sudock – The Orange County Register

Many ideas have been tossed around over the years for how to reuse the hangar, a 17-story wooden structure built by the Navy in 1942. Suggestions have included a museum, a farmers market and shops – all of which are still possible, Buchanan said.

However, a number of complex, moving pieces still have to come together before the project can move forward.

The city is finalizing a study that’s been underway since June 2014 to determine options and cost estimates for getting the aging hangar ready for future uses. That study should be complete in around two months, Buchanan said, with testing for wind resistance and fire dangers still pending.

Next there’s the matter of who owns the property.

Roughly half of the project land is owned by the city. The city leases the other 60 acres, including the hangar site, from the Navy, which is still doing environmental remediation there. Tustin should take over ownership of the land once that cleanup is resolved – likely in about two years.

Then there’s the lack of infrastructure. Utilities on the property are too old to be useful, Buchanan said. And while Tustin has extended several area roads in anticipation of the development, Moffett Drive still likely needs to be continued west to Armstrong Avenue.

In looking for a developer to take on the challenging project, Tustin staff sought a company with experience reusing military bases and historic structures, Buchanan said. OliverMcMillan stood out for its work in San Diego, Houston, Atlanta and on the former Glenview Naval Air Station in Illinois, where the company incorporated a historic control tower into a mixed-use village.

If Tustin’s City Council approves the agreement with OliverMcMillan, both the city and the company will commit to spending up to $1.5 million each as they work together over the next several years to develop a concept plan, business plan and development agreement.

A specific development proposal would then likely be brought back to the City Council for a decision sometime in 2018.

In the meantime, Buchanan said the hangar will continue to be used for special events and other temporary leases so long as it remains safe to do so.

Tustin Legacy is a master-planned community that’s being built in phases in the middle of Orange County on 1,600 acres that were once the Marine Corps Air Station.

The city first approved plans for converting the former military base in 2001. Over the past decade, developers have built more than 3,200 homes and apartment units, a school, a park and 1 million square feet of retail in The District shopping center.

Another 3,600 homes are slated to be built in the next 10 years or so, plus 5 million square feet of commercial space, more parks, a secondary school and other amenities.