Posted on November 9, 2015 by LighterThanAirSociety 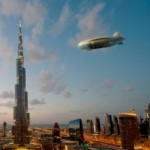 Whoever said dreaming is free has clearly never spoken to Capt. Khalid Al-Ansari. The Emirati pilot, who flies transport aircraft for the government, has spent “enough money to build a house” on a concept that would use airships to turn the cities of Dubai and Abu Dhabi into living exhibits in a most unusual gallery.

His ‘Spirit of the Emirates’ project (Stand 1908) would see a fleet of three Zeppelin NT airships carrying paying passengers on flights of between 30 minutes and three hours. A tablet-based augmented reality system will annotate the view from 1,500 ft above the cities.

“We’re talking about a very high-end, luxury platform,” Capt Khalid tells ShowNews. “The augmented reality will make the country like a big museum, and for the passenger it will be walking inside that big museum with the device telling you about it in the language that you prefer.”

Over the past 12 years, Khalid’s research has taken him to the USA, France and Germany, where he has flown on a variety of airships. He settled on the Zeppelin NT as his preferred platform following flights at the company’s Friedrichshafen headquarters. The existing Zeppelin NT aircraft would suffice for the role, but modifications would be needed equip the cabin with suitable climate control capabilities. 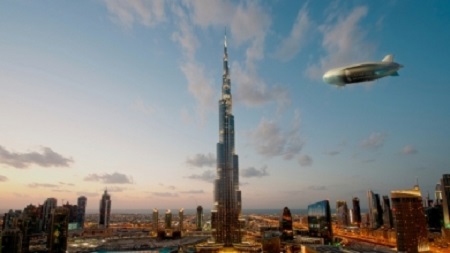 Concept of the Spirit of Emirates service by Happy Designs.
Source: AviationWeek.com

Khalid has had initial approval for the idea from the UAE’s General Civil Aviation Authority, though formal permissions would depend on the final aircraft configuration. He is seeking funding, and believes the project could be in profit within five years.

“I think it’s the right time to show the idea to decision-makers and to the public,” Khalid says. “I’d also like to show people that we need to have some new and different projects in the nation.”

What has kept the dream going has been Khalid’s love of the airship experience.

“It’s very, very different to anything else in the sky,” Khalid says. “It’s very quiet, very friendly. I’ve felt joy and pleasure flying on airships: the feeling of floating is amazing.”

(This video showcases a number of concepts by Happy Designs. It is not intended to represent actual flight paths of the aircraft.)