Posted on November 21, 2014 by LighterThanAirSociety 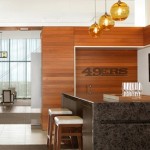 TerraMai was honored to be part of HNTB’s design vision for the new Levi’s® Stadium that provides an unparalleled fan experience. HTNB, a national design leader in sport and entertainment facilities, was chosen to create the new home for the San Francisco 49ers football team.

The 69,000-seat stadium situated in the heart of Silicon Valley has all the latest technical amenities. TerraMai’s reclaimed Moffett Field Redwood is just what was needed to add warmth and rich, local history to the new facility. This premium old-growth redwood comes from the iconic Hanger One facility located at nearby Moffett Field, one of America’s iconic structures. The US Navy originally built Moffett Field in the 1930’s as a zeppelin hangar during the height of the California redwood lumber industry. The majestic old-growth redwood trees were logged within miles of Silicon Valley, very likely from Levi’s® clad workers. 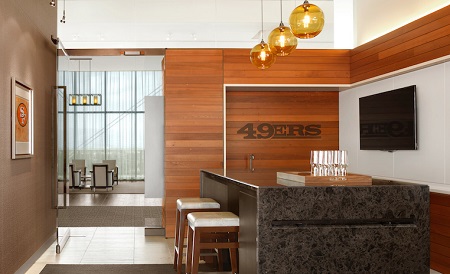 Google founders Larry Paige and Sergey Brin took over the restoration of Hangar One in 2012. Ken Westrick, TerraMai CEO, visited the facility and upon seeing the stunning old-growth redwood coming out of the Hangar One, purchased it all. 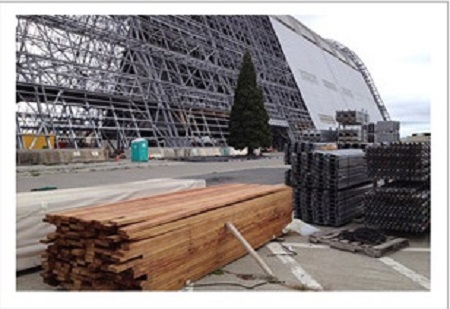 The gorgeous reclaimed redwood is found as paneling, cabinetry and cladding for seating and benches throughout Levi’s® Stadium’s suites and luxury boxes. 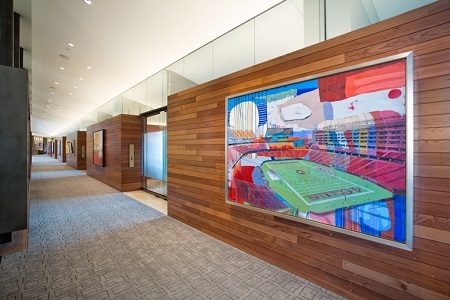 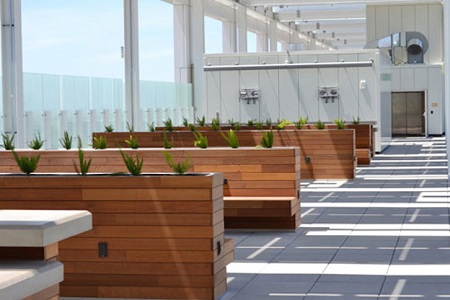 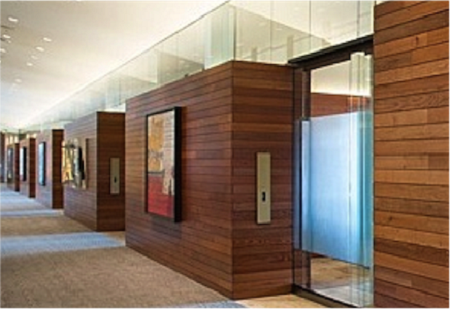 Along with TerraMai reclaimed wood, the stadium features other environmentally friendly innovations such as solar panels, a green roof, paperless ticketing and energy efficient building control systems. “The choice of reclaimed redwood demonstrates both the 49ers and Levi’s® fine aesthetic tastes, their respect for materials with a special history, and their commitment to the environment,” Westrick said.

Completed in 1931 by the U.S. Navy as a zeppelin hangar, the facility has a colorful history that involves World War II, Cold War spying, space exploration and Google founders Larry Page and Sergey Brin.

Hangar One – One of America’s Unique Structures 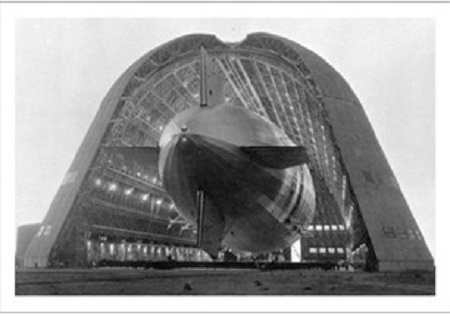 Hagar One is one of the largest freestanding structures in the world. This redwood was uncovered inside the roof framework as part of a recent renovation of the facility. TerraMai’s Moffett Field Redwood is available as lumber, paneling, siding and custom applications.

Located in the heart of Silicon Valley, Hangar One is one of the valley’s most recognizable and beloved landmarks. Hangar One is an example of American industrial architecture that influenced designers in Europe and the U.S. working toward what we now call ‘Modern Architecture.’

The absence of ornamentation, the straightforward use of materials like steel, concrete and glass, the streamlined forms and the overall adherence to what became the guiding principle of Modern design, “Form Follows Function” are all evident in this building.

The structure is built on a network of steel girders sheathed in galvanized steel. The building’s footprint covers 8 acres. The structure was designed by the Prague-born airship and structural engineer Dr. Karl Arnstein, who was also the chief designer of the U.S. Navy airships the USS Akron and the USS Macon, shown above. Hangar One was originally designed and built to accommodate the USS Macon, along with several smaller zeppelins.

Like the zeppelins it was built to house, the building itself has an aerodynamic shape. The inward curing walls form an elongated “catenary form”.

Other unique design features include “clam-shell” doors originally designed to reduce turbulence when the Macon was moved in and out of the structure on windy days. The building’s “orange peel” doors each weigh 200 short tons and are operated by 150 hp motors. Two elevators and an intricate network of catwalks allow access to all parts of the structure. Narrow-gauge rail tracks run the length of the structure and were used to transport the Macon and other airships to flight positions.

The USS Macon was built by the U.S. Navy for air reconnaissance. It also served as a “flying aircraft carrier” with the capacity to carry five F9C Sparrowhawk biplanes. The planes were stored in bays inside the hull.

The zeppelin was kept aloft by 12 helium-filled gas “balloons” or cells within the main hull. The airship was powered by eight German-made Maybach 12-cylninder 560 hp gasoline powered engines with propellers that could be rotated downwards or backwards to provide thrust vectoring.

The Macon was caught in a wind shear off the coast of central California  on February 12, 1935 and eventually sank off Monterey Bay. Two of the airship’s crew of 76 men died, one who needlessly jumped ship while the Macon was still too high aloft above the water and another who abandoned a lifeboat to swim back to the wreckage in a failed effort to retrieve personal belongings.

The debris field of the Macon was located in 1991 by the Monterey Bay Aquarium Research Institute. A number of artifacts have since been recovered, including sonar, video and still camera data. The wreckage is listed on the National Register of Historic Places in 2010. 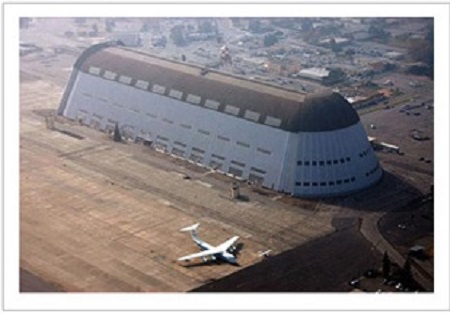 After the ditching of the Macon the mission of Hangar One and Moffett Field went through several generations of developments. It became a Naval air station in 1942 and served as a base for Maritime reconnaissance and anti-submarine warfare during the Cold War.

In the wake of the Cold War, Moffett Field was deemed expendable by Congress. It was closed as a naval air station in 1994 and turned over to the NASA Ames Research Center, which continues to operate the facility.

In addition to NASA, Moffett Field is also used by the California Air National Guard and by defence contractor Lockheed Martin for satellite manufacturing. It is also still open to limited air traffic, with an average of five to 10 landings per day.

Among the more high profile users of the airfield are Google founders Larry Page and Sergey Brin, who use it for their fleet of private jets. It is also used by Air Force One for presidential visits to the San Francisco Bay Area.

The status and fate of Hangar One has been a subject of intense debate in recent years.  It was listed as one of the 11 most endangered historic places in the U.S. by the National Trust for Historic Preservation in 2008.

After years of wrangling involving the U.S. Navy, NASA and various state and local agencies and groups, The Navy is in the process of removing the exterior panels and preserving the steel skeletal framework.

It was this process that revealed the pristine old-growth redwood hidden inside the roof structure. This material was originally milled in the 1920s, during the glory days of the California redwood lumber industry.

If and how Hangar One will be fully restored is still in question. Google founders Page and Brin, along with Google CEO Eric Schmidt, have proposed funding the estimated $33 million cost of fully restoring the structure in exchange for private use of two-thirds of the floor space for their eight private jets.

This last proposal is one that would have surprised the building’s original designers, on many levels.