Posted on November 17, 2014 by LighterThanAirSociety 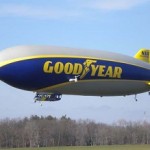 The airship had been approved earlier this year by the European Aviation Safety Agency (EASA). However, the FAA decided not to just endorse or ratify EASA’s approval because the ground handling equipment required for this airship was a totally new design, and also, the applications for which the airship will be used differ from the traditional ones for European Zeppelins.

Wingfoot One taking off sporting its new US registration (N1A).
Photo: Neal Sausen

The airship had made its maiden flight in March of 2014, but was being flown with a German registration. Now that the aircraft has its full FAA approval it is flying with its US registration: N1A.