Google Takes Over Aging Moffett Field and Its Airship Hangars

Posted on April 1, 2015 by LighterThanAirSociety 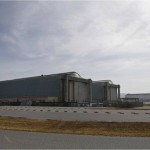 Built for an age when 800-foot-long flying aircraft carriers were the cutting edge of aviation, the colossal hangars of the Moffett Federal Airfield are about to become roosts for Silicon Valley’s latest ideas.

Google on Wednesday formally takes over the 1,000-acre site with plans to repurpose its three airship hangars as laboratories for developing robots, rovers, drones, Internet-carrying balloons and other cutting-edge technology. The company will also manage the airfield’s two runways and upgrade an old military golf course for public use.

The restoration could not come soon enough for admirers of the landmark structures. 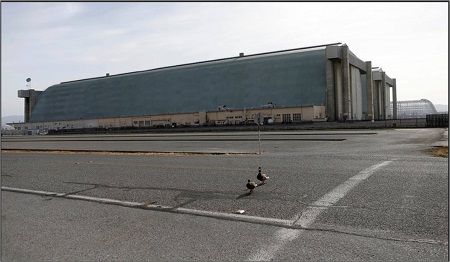 Ducks walk in front of, from left to right, Hangar Three, Hangar Two and Hangar One looking west at Moffett Field in Mountain View, Calif., on Monday, March 30, 2015. Just a few weeks before Google’s planned takeover of the Moffett Federal Airfield, the old redwood beams that brace one of the field’s historic airship hangars began falling to the ground. The disrepair is one example of the hassles Google is about to take responsibility for when it begins managing the airfield on April 1 and refurbishes its three hangars to be used as laboratories for its high-tech research.
Photo: Nhat V. Meyer/Bay Area News Group.

“It’s pretty awe-inspiring to walk inside the hangars and see the woodwork,” said Col. Gregory Jones, commander of the California Air National Guard’s 129th Rescue Wing, which will continue to operate its own corner of the airfield when Google takes over. “They’re an engineering marvel.” 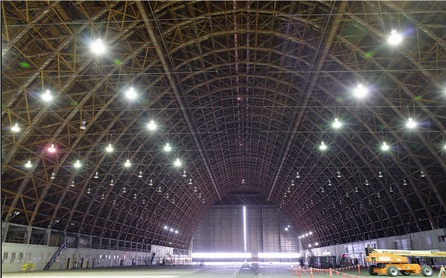 The interior of Hangar 2 at Moffett Field. On Wednesday, April 1, 2015, Google will formally take over control of all three of the historic former airship hangars and begin the process of renovating them to repurpose them as technology development centers.
Photo: Dominic Hart/NASA Ames.

They are also falling apart. NASA was finalizing its arrangements to hand over the land to Google when one of the World War II-era wood beams bracing historic Hangar Three came crashing down in February. The falling Douglas fir timber did little damage, but it illustrates the hassles Google is assuming when its subsidiary Planetary Ventures begins managing the airfield, ending an 84-year era of federal stewardship.

Google promises to renovate Moffett’s three hangars for use as research laboratories for the testing and assembly of robots, space rovers and other emerging technologies. One of them, Hangar Two, is already being used to test Google’s high-altitude Internet balloons. Hangar One, the oldest, biggest and most stylish — preservationists have spent decades fighting for its restoration — is a hulk of scaffolding awaiting a new metal skin. Hangar Three, where the truss was damaged in February, might need the most immediate repair. 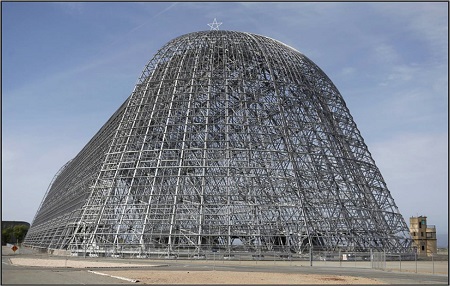 All of them are considered jewels of Silicon Valley. Google has declined to discuss its plans for the airfield ahead of Wednesday’s takeover, but the $1.16 billion, 60-year lease deal it signed with NASA last year has been welcomed as a lifesaver for the decaying property. 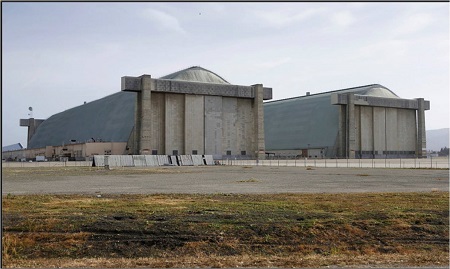 “Those hangars are in disrepair. … We have not maintained them for a couple decades,” said Deborah Feng, associate center director for the mission support areas of NASA’s nearby Ames Research Center.

“We’re very excited things are going to get started on the 1,000 acres,” Feng said. “It’s an immediate relief for a piece of property that’s significant to the South Bay.” 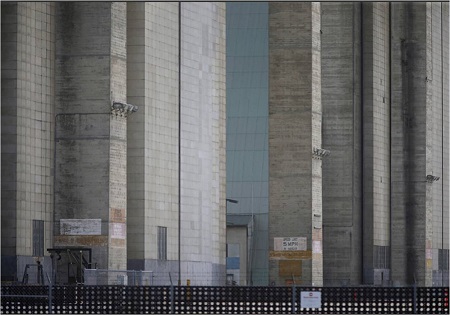 Google’s Planetary Ventures has already hired an airport contractor, AvPORTS, to manage the runways that are rarely used today except by experimental aircraft, satellite company cargo flights, a secretive flying car startup firm, military transport planes and helicopters, and the jets owned by Google executives, according to public documents. Another contractor, OB Sports, will upgrade and maintain the Moffett Field Golf Course, with an aim to open it up for public use. Google, whose headquarters are just three miles away from the airfield, also promises to build a new museum and educational center. 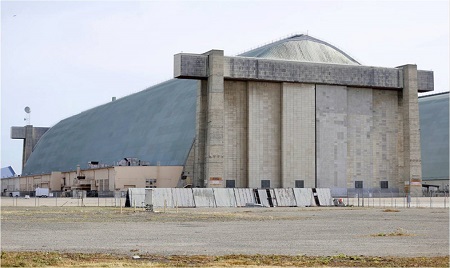 But its most highly anticipated plans are to fix up the old naval hangars, preserving for future generations some of the last vestiges of the dirigible era. Some hangar aficionados are disappointed they won’t become publicly accessible monuments, but others believe using them for research and development suits their original mission.

“They represent an era of aviation that has pretty much passed,” said Mountain View City Councilman Lenny Siegel, who convened the Save Hangar One Committee a decade ago to preserve the most iconic of the structures. “It represents this area and was part of the evolution of technology that led to what Silicon Valley is today,” he added. 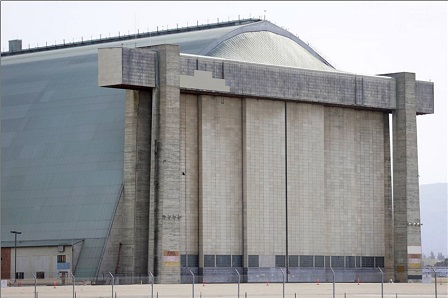 The U.S. Navy completed Hangar One in 1933 and made it home to the USS Macon. The rigid airship crashed off the Big Sur coast two years later, sinking to the bottom of Monterey Bay along with two crewmen and four of the biplanes it carried on its side. Such catastrophic accidents became a common fate for airships. Two deadly New Jersey crashes, of the USS Akron in 1933 and Germany’s Hindenburg in 1937, were the most notorious. 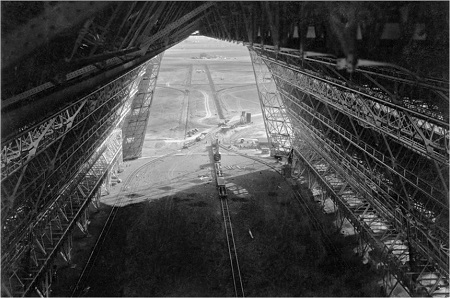 In this photograph circa 1931-1933, Moffett Field’s Hanger One stands partially constructed in Mountain View, California. Moffett Field’s Hangar One was built in 1932 to house the USS Macon, a helium-filled airship slightly smaller than the Hindenburg, that crashed in 1935. The hangar, 198 feet high and big enough to hold 10 American football fields, is a familiar sight on Highway 101 that runs through Silicon Valley.
Photo: Moffett Field Historical Society via Bloomberg News. 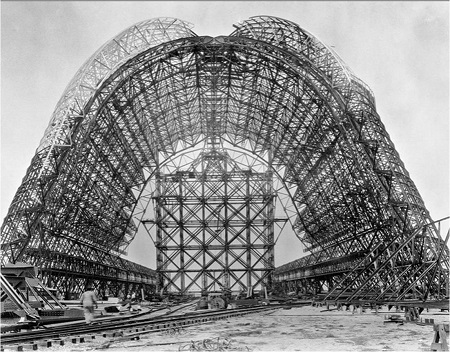 By the time the Navy built Hangars Two and Three in 1943, they were designing space for blimps, not rigid airships.

“Constructed at the scale of airships, rather than humans, these buildings are of such great magnitude that they confound perception,” said a 2006 report on the hangars by San Francisco architectural preservation firm Page & Turnbull. “Their monumental presence creates a sense of grandeur and awe, akin to some of the greater works of human engineering.” 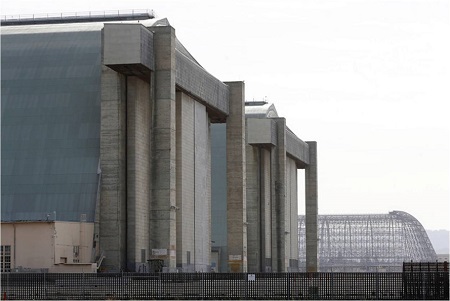 Built at a time when steel was in high demand for World War II military vehicles, 171-foot-high structures were framed with wood. That made them less environmentally dangerous than Hangar One, whose toxic exterior had to be removed several years ago.

The U.S. Environmental Protection Agency and the San Francisco Bay Regional Water Quality Control Board both sent “comfort letters” to Planetary Ventures in March and cleared the way for Wednesday’s handover by clarifying that the company would not be liable for the ongoing toxic cleanup of the site. 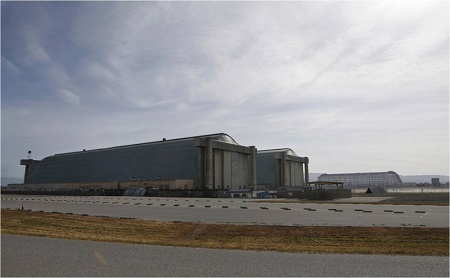 Google is eager to fix up the hangars for its own projects, returning Hangar One to its glory as a “state-of-the-art, futuristic facility on a grand scale,” according to the company’s bid. But without, perhaps, all the catastrophe that the zeppelins once wrought. 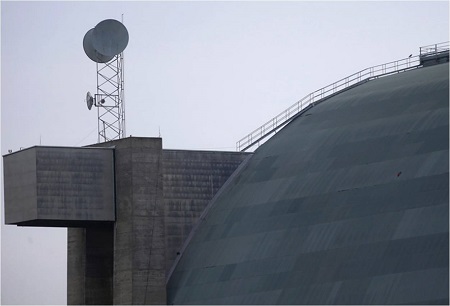 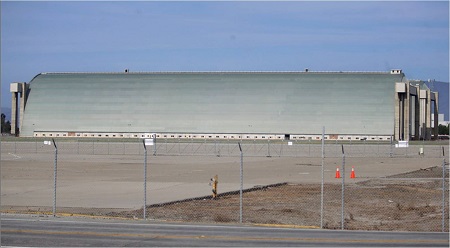 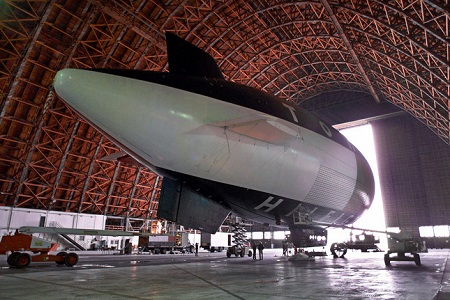 The Skyship 600B is seen inside Hangar 2 at the NASA Ames Research Center in Moffett Field, on Wednesday, Dec. 8, 1999. Leased by fashion designer Tommy Hilfiger, the $8 million airship, stretching two-thirds the length of a football field and as tall as a 747 jumbo jet, is the largest certified airship in operation today, and the first to visit historic Moffett Field for an extended period since 1947. Officials at the field say the Skyship is staying at the facility for routine maintenance, which includes getting a bath.
Photo: Ben Margot/AP Photo