Posted on April 1, 2015 by LighterThanAirSociety 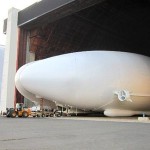 A company behind the world’s largest airship has launched an equity crowd-funding campaign to help raise funds to get its Airlander 10 off the ground again.

The airship, more than 90 meters (295 ft.) long and capable of staying in the air for several days, was originally procured by the US military to perform communication and survey roles. However, the contract was later cancelled following US budget cuts. 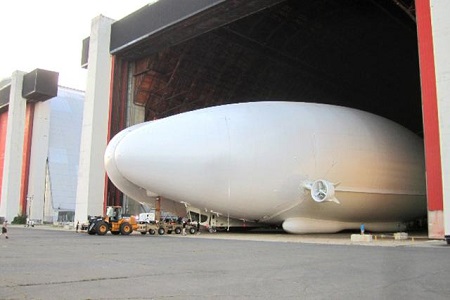 Airlander 10 taxiing out of the US Hangar in Lakehurst, New Jersey, ahead of her first 90 minute test flight in 2012.
Photo: HAV

Earlier this year, Bedfordshire-based Hybrid Air Vehicles (HAV) won £3.4m (US$ 5.0 million) of funding from the UK government’s Regional Growth Fund which it needs to match by a further £2m (US$ 3.0 million).

The firm has estimated the market for airships utilizing aerodynamics and lighter-than-air technology to stay airborne could be worth up to $50bn over the next 20 years.

“We’re offering a chance for investors to jump on board and be part of our journey as we prepare for take-off,” said the firm’s CEO Stephen McGlennan.

HAV foresees the environmentally friendly airships, which produce little noise or pollution, could be used for such chores as delivering cargo across large distances, getting aid and supplies to remote or dangerous locations and to ferry tourists from A to B.

The vertical take-off airships are remotely controlled and capable of operating in extreme environments, including ice, water and desert.

The equity crowd-funding campaign, which HAV hopes will raise its value to £36m, will run on Crowdcube until mid-May.

HAV has benefited from £60m (US$ 89 million) of investment in the aircraft from the US Government and a total of over £5m (US$ 7.4 million) from UK Government grants.

Airlander 10 was flown for the first time three years ago during a test in the US when it stayed airborne for 90 minutes.