Posted on September 22, 2017 by LighterThanAirSociety 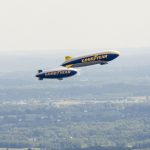 Teaming Goodyear blimp’s unique history with sports and broadcasting is a big, exciting story.  Enjoy the behind-the-scenes-play in a new documentary.  “BLIMP! Sports, Broadcasting and the Goodyear Airship” – an official selection of the Chagrin Documentary Film Festival. The film was made possible with a grant from the Ohio Humanities Council.

View a trailer of the documentary below.

For further details of the Chagrin Documentary Film Festival visit their website .

The University of Akron will be screening the documentary at 6:30 p.m., Tuesday, Oct. 10 on campus in the Daum Theater next to Kolbe Hall near Carroll St.  Parking is available in the nearby decks and surface lots. This screening is free and open to the public but reservations are suggested by emailing mskaggs@uakron.edu.

A panel discussion with humanities scholars will follow. A reception will follow in the Kolbe Hall TV studio. Many of the production team and the personalities in the film will be on hand to answer questions.

The Goodyear blimp, one of the best-known corporate symbols, has hovered over some of the biggest sporting events in the nation’s history, from the Rose Bowl to the World Series, from the Kentucky Derby to the Super Bowl, from the Olympics to NASCAR. It’s hard to imagine what sports broadcasting would be like without the blimp.  Yet in the 1950s, Goodyear executives almost decommissioned this iconic, friendly behemoth in the sky.  Instead, the airship went from the brink of extinction to the biggest spectator in sports broadcasting.

Produced and directed by Kathleen Endres, instructor at the School of Communication, this fascinating lighter than air history of blimps and sports broadcasting, technology and competitive business was created by members of the Akron community and faculty, staff, students and alumni from The University of Akron.

For further details about the documentary visit the website.