Posted on May 12, 2015 by LighterThanAirSociety 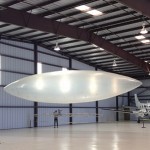 If you ever suspected that Chris Burden is at heart a 19th-century engineer (think bridges, trains and proto-planes) in the guise of a burly 21st-century conceptual artist, his newest work would give you more ammunition.

Or more lifting power, as this particular work takes the form of a 40-ft-long almond-shaped polyurethane balloon that, powered by helium and a small gasoline motor, flies through the air in large circles.

Over a decade in the making, Ode to Santos Dumont is named after the Brazilian aviation pioneer (1873-1931) who gained fame in 1901 for flying in a dirigible from Parc Saint Cloud in Paris to the Eiffel Tower and back within 30 minutes. Later, his complaints about the inconvenience of checking a pocket watch while in flight inspired Cartier to create a man’s wristwatch bearing his name. 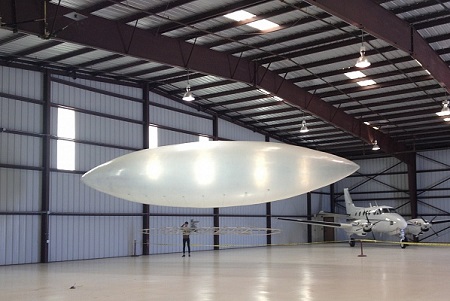 On Saturday, Gagosian gallery brought a small group to an airplane hangar in Camarillo, half-way between Los Angeles and Santa Barbara, to see Burden’s version of an unmanned dirigible in action. At noon, the artist’s collaborator, machinist John Biggs, turned on the motor, and the balloon and its aluminum gondola—made with erector-set-like components—lifted off with a whirring sound. It then moved gracefully in loops within the hangar, easily rounding corners like a fish in a bowl. (In reality, four hard-to-see cables kept it tethered to a central point.)

The gallery’s director Deborah McLeod said they hope to see the work in a museum soon. A museum like LACMA, where Burden’s Urban Light is already a crowd favorite. “LACMA is a possibility,” she said, noting: “Michael Govan is Chris’s greatest patron and champion, and he would love to do it.” If that happens, look for the flying machine inside a building such as the Resnick, as this aircraft is not made to withstand winds.

Ode to Santos Dumont by Chris Burden will be on view in the Lynda and Stewart Resnick Exhibition Pavilion at LACMA from Monday, May 18 through Sunday, June 21, 2015.

Viewing will be included in the museum’s general admission ticket; members are free. More details including members’ preview opportunities and performance times will be available soon.