Getting the low-density supersonic decelerator (LDSD) vehicle to test altitude

Posted on May 12, 2015 by LighterThanAirSociety 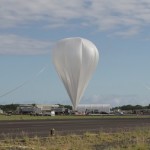 In June NASA will conduct the second flight of the Low-Density Supersonic Decelerator (LDSD) test vehicle from the U.S. Navy Pacific Missile Range Facility (PMRF) located on the Island of Kauai, Hawaii.

The test will begin at an altitude of about 120,000 feet. But what does it take to get a supersonic test vehicle to that altitude? It’s easier said than done. 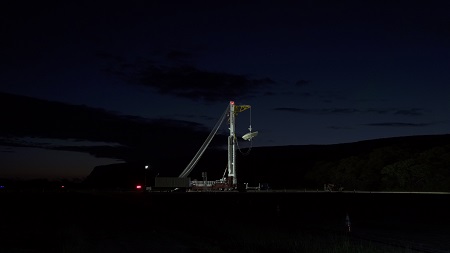 In addition to finding a way to deliver the test vehicle to the right height, the project also had to find a location and a team to help coordinate the launch range activities.

Mark Adler, LDSD project manager at NASA’s Jet Propulsion Laboratory (JPL) in Pasadena, California, said, “To support the LDSD supersonic flights we turned to NASA’s Wallops Flight Facility in Virginia which has experience in launching scientific balloons, conducting remote campaigns and a working relationship with the Pacific Missile Range Facility. All of that experience has been vital in conducting these tests efficiently and successfully.”

This isn’t your everyday party balloon

NASA balloons are typically used for launching science instruments weighing thousands of pounds to altitudes up to 130,000 feet for durations lasting a few hours to more than a month, from sites all around the world.

The balloon being used for the LDSD test is similar to those used to support scientific flights. The balloon is 34.4 million cubic feet in volume and consists of 22 acres of plastic similar in thickness to that used for sandwich bags. The total flight system length at launch is 980 feet, including the balloon, parachute, cable ladder and test vehicle.

David Gregory, deputy chief of the Balloon Program Office at Wallops, said, “The largest difficulty in preparing for this mission was developing a system to safely hold and launch the LDSD test vehicle.” 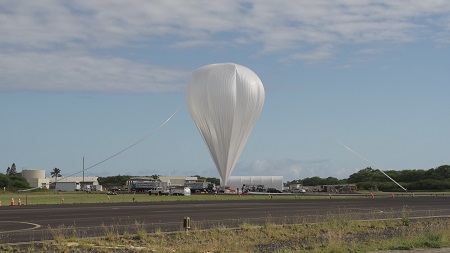 “Typically, a large mobile vehicle, similar to a crane, holds the science payload and is driven to align the payload under the balloon at launch. However, the LDSD test vehicle contains an Orbital ATK Star-48 solid rocket motor. So due to safety considerations, a unique design remote operated static launch tower was built to keep personnel away from the test vehicle at launch. This is unlike our typical launches where we use a mobile launch vehicle that requires operations personnel to be in close proximity to the payload at the time of the balloon launch,” Gregory said.

Engineers from Wallops and the CSBF went to work and with Foremost Industries LP of Calgary, Canada, developed a unique launch tower that safely releases the LDSD test vehicle for its flight to Earth’s upper atmosphere.

Gregory said, “The development of the launch tower was the key to allowing us to successfully and safely launch the LDSD test vehicle.”

Dave Wilcox, LDSD project manager at Wallops, said. “The other big issue for us was finding a facility with the appropriate wind conditions for the balloon launch and flight and a location that allowed us to provide public and environmentally safe conditions for conducting the LDSD test. After looking at several locations, it was determined that PMRF fit the bill.”

PMRF is providing ground instrumentation for command uplink and flight system (balloon and test vehicle) tracking; the necessary facilities for integration, launch, and operation of the flight system; and the necessary range services such as aircraft surveillance for range clearance.

Wallops has extensive experience in conducting “remote” campaigns through the NASA sounding rocket, balloons and airborne sciences programs. In addition, it is home to NASA’s only owned rocket launch range.

Wilcox said, “Because of this experience, Wallops is tasked with the overall mission execution of the project countdown, providing recovery services of the balloon and the LDSD vehicle from the Pacific Ocean following the test, launch of meteorological rockets following the LDSD test and coordinating the support provided by PMRF.”

A scientific balloon lifts NASA’s LDSD test vehicle in this 2014 flight from the island of Kauai, Hawaii. The LDSD test is designed to investigate breakthrough technologies that will benefit landing future robotic and human Mars missions, as well as aid in safely returning large payloads to Earth. The LDSD test over the Pacific Ocean simulates the supersonic entry and descent speeds a spacecraft   would be exposed to when flying through the Martian atmosphere. Credit: NASA/Bill Rodman

“In addition, Wallops is fabricating and providing the test vehicle’s on-board avionics and associated electronic ground support equipment, which are based heavily on proven sounding rocket systems,” Wilcox said.

Recovering the flight articles from the Pacific

The recovery boats are locally owned and operated fishing/commercial freight vessels that are contracting with NASA to perform the recovery operations. NASA subject matter experts and trained Navy divers will be aboard for the operations. The recovery vessels are being supplied by the Hawaii Resource Group located on the Island of Oahu and the spent balloon is being recycled by Pacific Farm Services on the Island of Kauai.

The LDSD testing will be conducted through NASA’s Technology Demonstrations Missions program, based at NASA’s Marshall Space Flight Center in Huntsville, Alabama, with the technology development work and testing led by NASA’s Jet Propulsion Laboratory in Pasadena, California. NASA’s Wallops Flight Facility in Virginia is coordinating support with the Pacific Missile Range Facility and providing the balloon systems.

The LDSD project is one of several crosscutting technologies NASA’s Space Technology Mission Directorate is developing to create the new knowledge and capabilities necessary to enable our future missions to an asteroid, Mars and beyond. The directorate is committed to developing the critical technologies required to enable future exploration missions beyond low Earth orbit.

While the actual test may only last a few minutes, the road to getting to the test is long and the players involved are many.