Posted on January 30, 2015 by LighterThanAirSociety 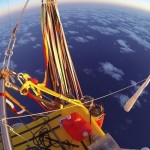 Two pilots have surpassed the world distance record for a flight in a helium balloon after crossing the Pacific Ocean. 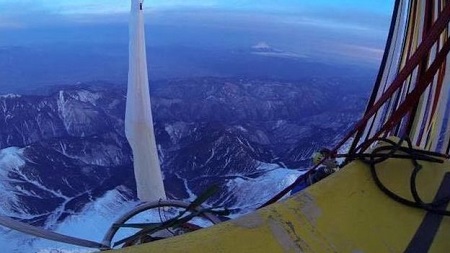 The gas balloon took off from Saga, Japan, on 24 January.
Source: BBC.com

They left Japan in their “Two Eagles” balloon on Sunday and had aimed to land in Canada or the US.

However, weather has forced them to change course towards Mexico where they are due to land sometime on Saturday.

Their hi-tech balloon is made of a strong Kevlar and carbon-fiber composite, but weighs only 220 pounds (100kg). It is fitted with monitors and other instruments that track their course and compile data to be submitted to record-keepers. 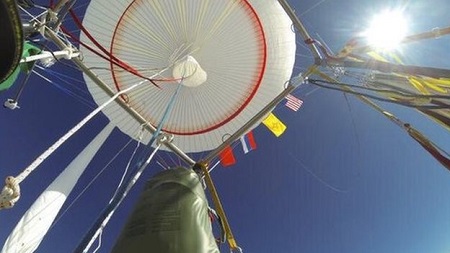 The balloon is set to land in Mexico after weather conditions changed the flight plan.
Source: BBC.com

The specially-designed capsule sits beneath a huge helium-filled envelope and is designed to stay aloft for up to 10 days. The pilots live in a closet-like space with a very low ceiling.

On Thursday, the Two Eagles team tweeted: “The pilots have just surpassed the distance needed to set a new record. 5,261 miles or 8,467km.”

“We’re not taking any time to celebrate,” said head of mission control Steve Shope. “We have a lot of work we have to do, and we’re just taking this flight one hour at a time.” 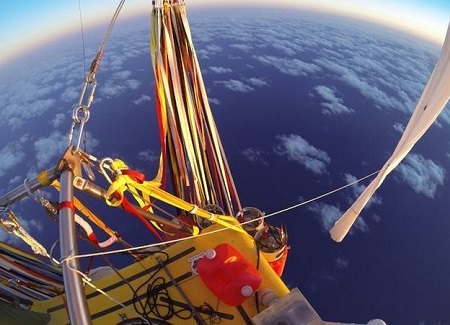 The Two Eagles balloon is capable of staying aloft for up to 10 days .
Source: BBC.com 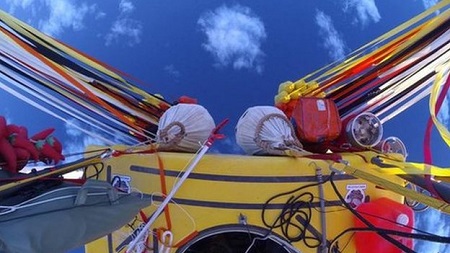 The color-coded cords help the pilots know how much ballast or expendable weight is used during the flight.
Source: BBC.com

On its website, the team says Two Eagles will not have “broken the record” until documentation is approved by the US National Aeronautic Association followed by the Federation Aeronautique Internationale – a process that could take several weeks or months. The existing duration record they hope to beat was set in 1978 when three pilots made the first trans-Atlantic balloon flight, spending 137 hours, 5 minutes and 50 seconds in a gas balloon.

Two Eagles should pass the existing record about 15:50 GMT. To set a new record, the team must stay aloft for about 138 hours and 45 minutes.

In 1981, the Double Eagle V was the first gas balloon to successfully cross the Pacific Ocean and set the existing distance record.

Crew members Mr. Abruzzo, Mr. Newman, Ron Clark and Rocky Aoki made it from Nagashima, Japan, to Mendocino National Forest in California in 84 hours and 31 minutes.

The current team named its craft in honor of the existing record holders.

Two Eagles can stay in the air for a maximum of 10 days; it’s now day five of the journey.

At the moment, it is not clear exactly where the Two Eagles balloon will land.

The team had been aiming for Canada but a ride of high-pressure ridge off the US West Coast forced the balloon into a sweeping right turn toward Mexico.

A network of balloon enthusiasts has been organized to act as chase crews, but correspondents says it remains unclear if the balloon will be able to land in a place where a ground crew can help them.