A Photovoltaic Balloon Could Bring Electricity to Disaster Zones

Posted on January 14, 2015 by LighterThanAirSociety 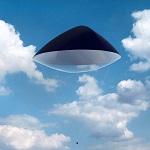 Moored to a base with batteries, the Zephyr collects enough solar energy to power 15 relief tents and a telecommunications network

Earthquakes, tornadoes, fires and floods; disasters come in a variety of forms. And depending on when and where they occur, the job of relief agencies can be difficult. Aid workers need electricity to help those affected, whether it’s used for setting up temporary hospitals and shelters, or for locating survivors in the wreckage. 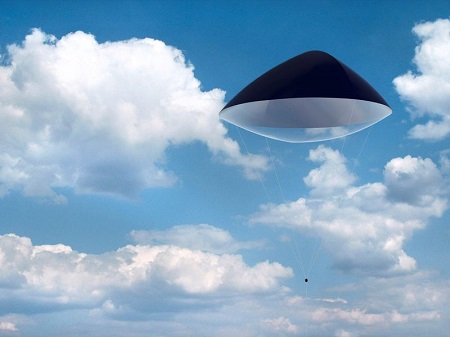 Just add water. The Zephyr has an electrolyzer on board that uses nine liters of water to produce hydrogen to inflate.
Image credit: Julie Dautel

Diesel generators are frequently brought in to do the job, but they require a steady stream of fuel. So, what if there was a way to provide reliable power independent of supply line logistics? That’s the idea behind the Zephyr Photovoltaic Balloon, which uses solar energy to provide electricity in a disaster zone.

Engineer Karen Assaraf and designers Julie Dautel and Cédric Tomissi attended Le Laboratoire, a contemporary art and design center in central Paris, to ponder “energy for the future” and compete for the Paris ArtScience Prize. Focusing on life-threatening situations where energy was imperative,

the three students envisioned an autonomous device that could easily be set up in remote locations to generate electricity. That idea crystallized into an eco-friendly generator. 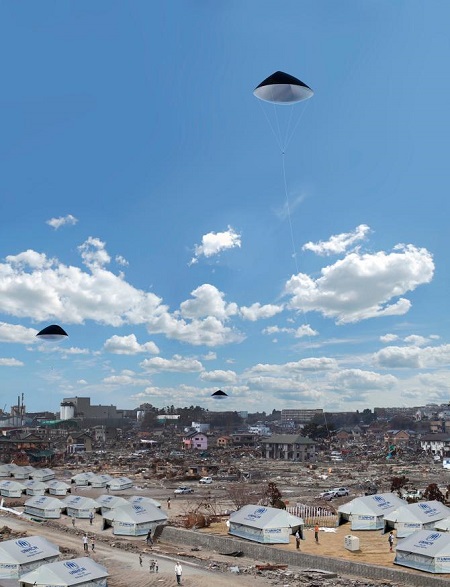 Inspired by “flying objects” like kites and satellites, the trio came up with the concept for the Zephyr. It’s essentially a large balloon, capable of capturing solar energy, and a base station housed in a portable crate. The base is comprised of three main sections: an onboard computer, a water compartment and a drawer that stores the balloon and its deployment cable.

Here’s how it works: the case is transported to a disaster zone. You remove the balloon from the drawer and open it up on the ground so it can start collecting solar power immediately. Now add water. Zephyr has an electrolyzer on board that uses nine liters of water to produce hydrogen to inflate the balloon, which attaches to the base with the cable.

The team partnered with the Institute for Research and Development of Photovoltaic Energy (IRDEP) to develop the balloon. Constructed of a hydrogen plastic sail, it’s covered with a thin film made of copper, indium, gallium and selenide (CIGS) that absorbs solar energy. The balloon can fly as high as 165 feet and has a steering mechanism, which ensures it receives maximum exposure to the sun. 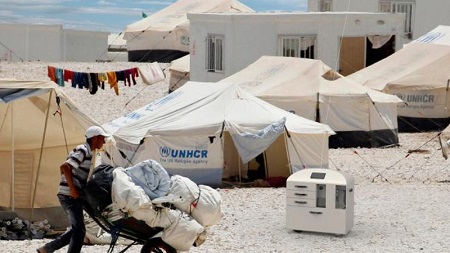 Electricity travels down the cable to the base, where it’s stored in nine high-capacity batteries. A transformer standardizes the electricity to specified requirements and distributes the power, enabling the production and consumption of energy to occur at the same location.

Zephyr’s creators estimate each unit can provide enough energy to light and heat up to 15 tents in a disaster area, as well as set up a telecommunications network. The concept is still in the development stages, but it’s getting a lot of recognition.

Earlier this year, the project garnered a Paris ArtScience Prize and ultimately won Challenge Humanitech 2014. In addition, the Zephyr won Entrepreneurial Pitch Day, hosted by HEC Paris, and EDF’s Challenge for Sharing Energy in the City, 2030.

These three students may not have come up with a way to turn water into wine, but turning water into power may be just as miraculous when disasters strike.

This article was originally published by the editorial team at XPRIZE, which designs and operates incentivized competitions to bring about radical breakthroughs for the benefit of humanity.

This entry was posted in Balloons and tagged airship, balloons, hydrogen balloon, photovoltaic. Bookmark the permalink.