Posted on September 16, 2016 by LighterThanAirSociety 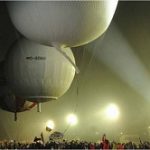 The 60th Coupe Aéronautique Gordon Bennett take off from Gladbeck in Germany has been postponed until Sunday, 18 September 2016 due to inclement weather.

What exactly is the Gordon Bennett balloon race?

The Coupe Aéronautique Gordon Bennett is the world’s “oldest and most prestigious event in aviation” according to organizers. It’s a long distance balloon race with a simple premise – everyone takes off together, and whoever goes the furthest – measured in a straight line – wins. It has the official title of the FAI World Long Distance Gas Balloon Championship, but everyone simply calls it the Gordon Bennett.

The obvious question: who was Gordon Bennett?

Born in 1841 in New York City, James Gordon Bennett was from the family that published the New York Herald newspaper. Educated in France he was a prolific sportsman – he organized the first tennis match in the USA and won the first trans-oceanic yacht race. As well as sport, he had an adventurous heart – as publisher of the New York Herald he sent Stanley into Africa to track down Dr David Livingstone, and mounted expeditions to the North Pole. He established the Gordon Bennett Cup for international yachting, and another for car racing. In 1906 he funded the Gordon Bennett Cup in Ballooning. It ran from 1906-1938 (less 1914-1919) and then stopped for four decades after WWII. It started again in 1983, when pilots took off from Paris, France. It’s been going ever since.

Pilots in the Gordon Bennett fly gas balloons… are they different to hot-air balloons?

Very. You have no doubt seen a hot-air balloon many times. Gas balloons however are rarer beasts. Instead of a gas burner to heat the air to make the hot-air balloon rise, gas balloons are filled with gases that are lighter than air – helium or hydrogen. In this year’s Gordon Bennett the balloons will be filled with hydrogen at the start. Once pilots take off they can’t re-fuel, and have to make the hydrogen last until they land. All the balloons have the same 1,000 cubic-meter capacity.

No. The balloon loses gas because the balloon expands in the heat of the day, and gas ‘burps’ out of an opening at the bottom of the balloon. Pilots also release gas to maneuver through the sky – to avoid air space, or to get into a better air-stream to be carried by the wind.

So the balloons go up and down?

Yes. As well as releasing gas, each balloon carries 500kg of ballast – sand or water – that they can release throughout the flight to make the balloon go up again. Release gas to descend, dump ballast to go up. Solar heating also has an effect. As the balloon warms up during the day it expands, and will rise. At night, the balloon will cool and descend.

Wait! You mean pilots fly their balloons overnight? Pilots fly their balloons for days and go through the night, yes. It depends on conditions of course, but three or four days aloft is not unusual. They cover hundreds, sometimes thousands of kilometers – and all while hanging in a traditional wicker basket. There are two pilots per balloon, and they use state-of-the art technology and equipment to navigate and fly. The longest flight in the history of the Gordon Bennett was flown by Bob Berben and Simeons Benoit from Belgium. They flew 3,400.39km from Albuquerque, USA, in 2005.

How many balloon teams are there?

This year there are 24 teams from 12 countries signed up to fly. Each team consists of two qualified pilots. Each country can enter up to three teams. Countries that have entered three teams this year include Switzerland, the USA, Germany, France and Belgium. The other countries include Poland, Netherlands, Lithuania, the UK, Spain, Austria and Australia. Whichever team wins, then hosts the competition in two years’ time.

So this year’s competition is in Gladbeck, Germany.

That means Germany won it in 2014? Yes, Wilhelm Eimers and Matthias Zenge flew 1,410.64km from Vichy, France in 2014. It has been 15 years since Germany last hosted the competition.

What can we expect at this year’s Gordon Bennett? What’s the schedule?

The competition lasts from 15-24 September. On Friday 16 September there will be a balloon festival, including a ‘night glow’, where hot air balloons inflate at dusk, and a chance to meet the Gordon Bennett pilots. After that, when the conditions are right, Gordon Bennett balloons will start to launch. They start to launch in the afternoon and then launch one at a time, within a few minutes of each other. Each time a balloon launches the national anthem of that team is played – it’s stirring stuff. All this depends on the weather of course. If the weather is bad, then the start is postponed until it clears.

Yes. Each balloon carries a satellite tracker which broadcasts their position to race control and also live online. It tells you their geographical position and altitude.