Posted on November 18, 2017 by LighterThanAirSociety

(Scroll down to read the official statement) 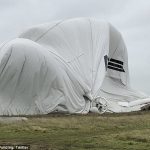 The world’s longest aircraft was seriously damaged on Saturday after it slipped its moorings and crashed into a field. 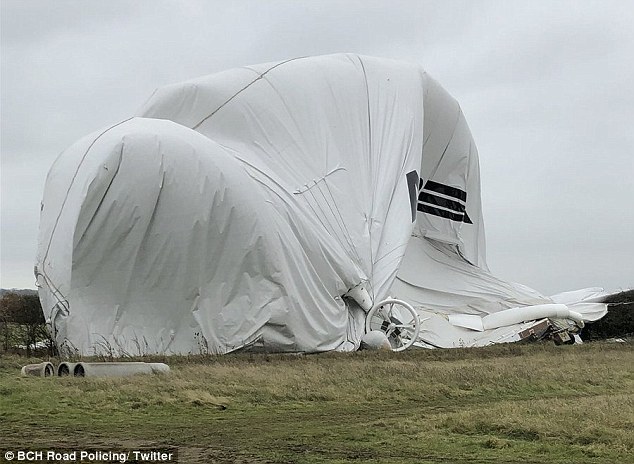 Pictures have emerged of the 20-tonne Airlander 10’s canopy completely collapsed after the prototype plummeted to the ground.
Source: Daily Mail – UK

Its manufacturers Hybrid Air Vehicles had carried out test flights on Friday before police were called to a site close to its hangars in Cardington, Beds, today.

Pub landlord and councillor Paul Smith said: ‘Sad news for Airship fans, The Airlander has broken free from its mast this morning and has deflated.

‘It’s currently in a field next to the Cardington sheds, the wreckage looks quite bad at the moment but we await confirmation apparently trees ripped the skin open.’

Beds, Cambs & Herts (BCH) Roads Policing Unit at 10.12am tweeted these pictures of the crash and said: ‘Officers attending collision involving the Airlander.’

A spokesman previously said the company hoped the Airlander – which can carry 10 tons and up to 60 passengers – will be used for luxury commercial flights over the world’s greatest sights from 2019. 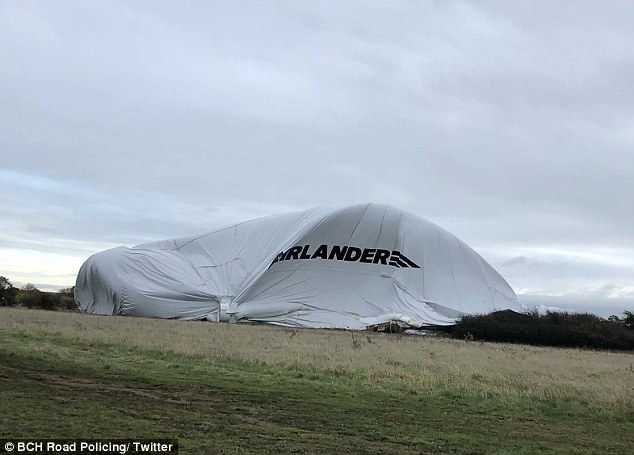 Its manufacturers Hybrid Air Vehicles had carried out test flights on Friday before police were called to a site close to its hangars in Cardington, Beds, today
Source: Daily Mail UK

Hundreds of people gathered around the airfield after a local group of ‘blimp spotters’ also used the weather conditions to predict the test flight.

The 92 meter-long airship cost £100m to get into the air before it crashed in only its second ever UK flight when its mooring lines got tangled with power lines in August 24 last year.

Today there was an incident with the Airlander aircraft at Cardington airfield. The aircraft was not flying at the time of the incident. Our initial assessment is that the aircraft broke free from its mooring mast for reasons that will be investigated. The aircraft has a safety system which operates automatically in circumstances of the aircraft breaking free of its mast, and is designed to rip open the hull and deflate the aircraft. This is a safety feature to ensure our aircraft minimises any potential damage to its surroundings in these circumstances. The aircraft is now deflated and secure on the edge of the airfield. The fuel and helium inside the Airlander have been made safe.

A number of local roads and a local footpath were temporarily closed off by Bedfordshire Police and we apologise for any inconvenience this has caused local residents.

We are testing a brand new type of aircraft and incidents of this nature can occur during this phase of development. We will assess the cause of the incident and the extent of repairs needed to the aircraft in the next few weeks.