Posted on March 1, 2014 by LighterThanAirSociety 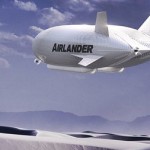 At first, you might mistake it for a giant airship – gas-filled balloon on top, pod slung underneath. 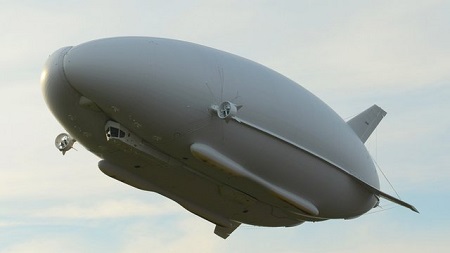 But the unique, aerodynamic shape of the balloon – it looks as if a series of cigars have been sewn together – means it can also generate lift just like an aeroplane wing.

That is key, because it enables the designers to make the machine heavier than air, which cuts the need to have dozens of crew hanging on to ropes holding it down every time you land.

In fact, you can land it via remote control with no-one on board at all if you like. And on water if needs be.

Let me put it into perspective for you.

This thing is two-and-a-half times longer than the distance covered by the Wright brothers’ first powered flight.

It is also almost 30ft (9.1m) longer than the massive cargo-carrying Antonov An-225, which until now was the longest aircraft ever built. 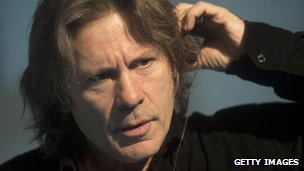 It costs about US$100m (£60m) and the designers are planning an even bigger version that will eventually be able to carry 50 tons at a time.

The company developing it has now received £2.5m (US$4.2m) of government funding to develop the technology and engineering for the project.

“We are jointly funding £2bn (US$3.3bn) of research and development into the next generation of quieter, more energy efficient and environmentally friendly planes,” says Business Secretary Vince Cable.

“That includes backing projects like Hybrid Air Vehicles’ innovative low carbon aircraft which can keep us at the cutting edge of new technology.

“Here is a British SME (small and medium sized enterprise) that has the potential to lead the world in its field.” 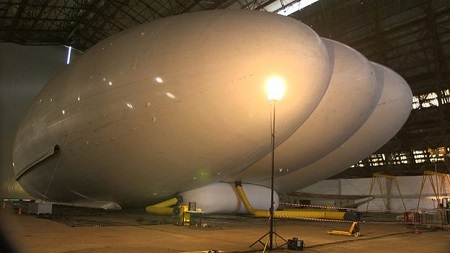 A first British flight is scheduled for later this year.
Source: BBC.com

‘We’ll fly over the Amazon’

All of which will be welcome news to one of the project’s high-profile investors, Bruce Dickinson.

He is one of those people who can’t stop achieving stuff.

As if being the lead singer of one of the world’s most successful and enduring rock bands, Iron Maiden, was not enough, he is also an airline pilot, businessman, and is investing in this project.

“The airship has always been with us, it’s just been waiting for the technology to catch up.”

He wants to sell them and he’ll be very good at it. As we chat in the hangar, he goes through its credentials.

It is 70% greener than a cargo plane, he says. It doesn’t need a runway, just two crew. And it can plunk 50 tons anywhere in the world you like, which is 50 times more than a helicopter.

He wants to drum up publicity with the kind of trip Richard Branson would dream up. A non-stop flight around the world – twice.

“It seizes my imagination. I want to get in this thing and fly it pole to pole,” he says.

“We’ll fly over the Amazon at 20ft (6m), over some of the world’s greatest cities and stream the whole thing on the internet.” 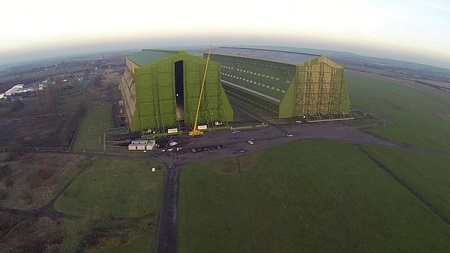 It is not surprising that we had to go to Britain’s biggest aircraft hangar to see the world’s longest aircraft.

For the best view, we had to climb the world’s scariest staircase too (safe of course, but not one for the faint-hearted).

Cardington shed number one, in Bedfordshire, is nearly as impressive as the flying machine inside it.

Built 100 years ago, it dominates the skyline around here (along with its neighbor Cardington number two shed) and it is bristling with history. This is where they built the ill-fated airship, R101, back in the 1920s.

That behemoth was twice as long as the hybrid air vehicle, had a beautiful dining room and lounge on board, and was meant to herald the future of flight, right up until the moment it was devoured by fire after a crash in France in 1930.

Technology has come a long way since then. The Hybrid Air Vehicle (HAV) is full of inert helium, not explosive hydrogen.

The HAV is back in the UK after the US Army ran out of money to develop the project. 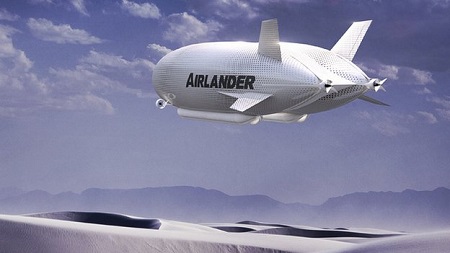 The advantage of modern airships is they can deliver supplies to remote areas, say supporters.
Source: BBC.com

The US military bought it a few years ago and got this aircraft flying as a surveillance machine – it can stay in the same spot for 21 days at a time, and can fly with a lot of bullet holes in it too.

When the US defense budget was slashed, the British developers bought it back, and now they are planning the first UK flight later this year.

They are hoping to sell it to oil and mining companies to deliver heavy equipment to remote corners of the world. But they are also keen to sell its humanitarian possibilities.

The HAV, which has been named Airlander, could ferry tons of supplies to and from any disaster zone, day in and day out.

All you would need is a crew of two and a patch of ground, or water on which to land.

How the Airlander was built. 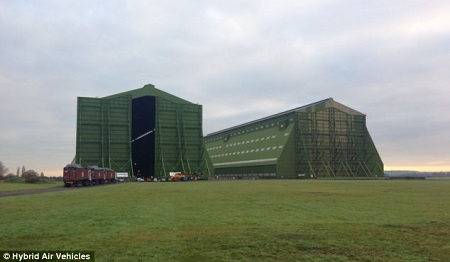 The HAV304 arriving at Cardington in December 2013.
Source: Daily Mail UK 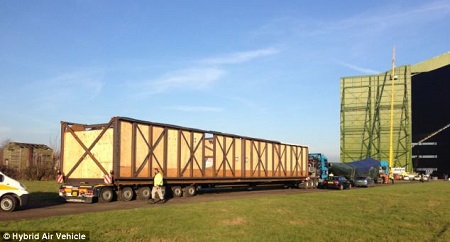 The HAV304 Hull and Mission Module arriving at Cardington.
Source: Daily Mail UK 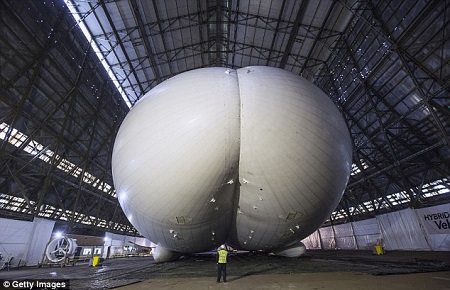 The world’s longest aircraft – part airship, plane and helicopter – has been unveiled in Cardington, Bedfordshire. It will be used for surveillance and aid missions.
Source: Daily Mail UK 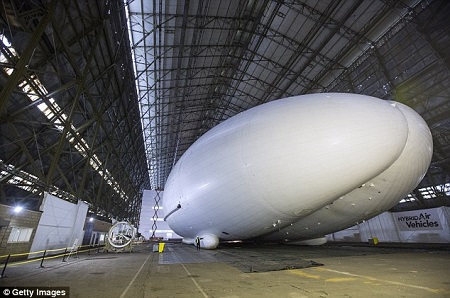 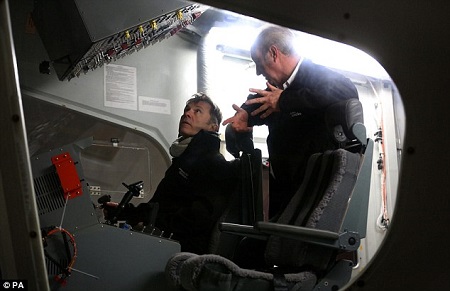 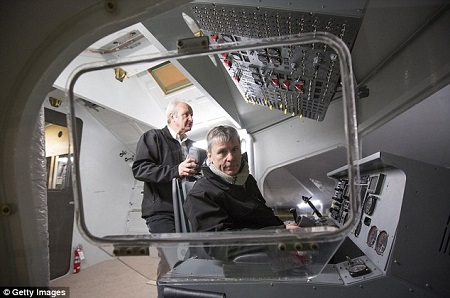 Bruce Dickinson at the controls of the helium-filled aircraft.
Source: Daily Mail UK 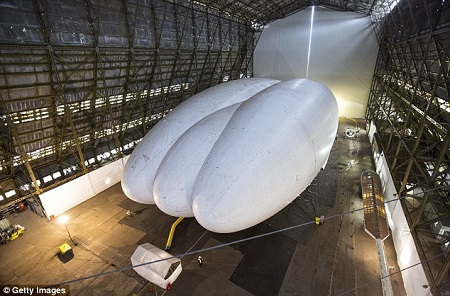 The unusual craft could be used for surveillance, staying airborne for three weeks at a time.
Source: Daily Mail UK 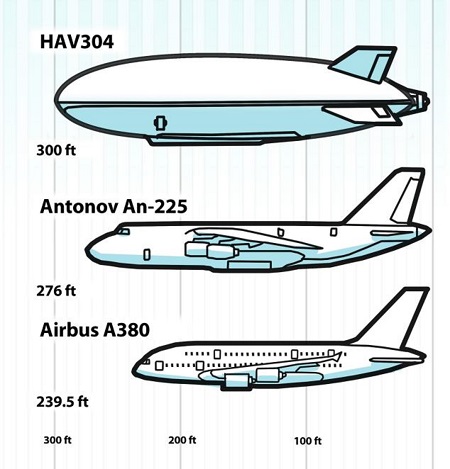 At 300ft, the aircraft is longer than the biggest airliner, the Airbus A380, which is 239.5ft. It is also almost 30ft (8m) longer than the airlift cargo aircraft Antonov An-225, which was until now the longest aircraft flying.
Source: Daily Mail UK