With $1M lost, Barry Prentice is not giving up on airships in Manitoba

Posted on July 22, 2016 by LighterThanAirSociety 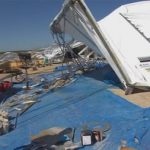 In an open field and under a calm, blue Manitoba sky, Barry Prentice stands, looking at $1 million worth of loss.

For five years, Prentice, a professor at the University of Manitoba’s Asper School of Business has devoted his time and much of his own money, he says, to building ultra-light airships.

His aspiration is for the ships to one day ferry goods and supplies to Manitoba’s remote northern communities. On Wednesday, the timeline for that goal was set back by a tornado-producing storm that ravaged three of Prentice’s airship prototypes and much of the work that has gone into them. 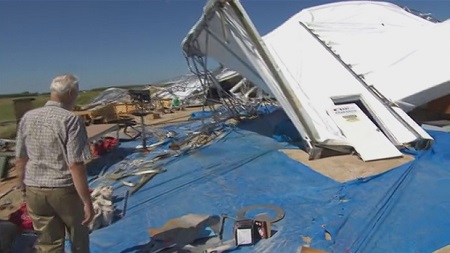 Barry Prentice walks onto the site of what used to be his airship prototypes, which were destroyed by Wednesday’s storm.
Source: CBC.

The airships, Prentice said, were not insured. He estimates the damage represents $1 million in losses for him and his research partner, Winnipeg pilot Dale George.

“The gondola’s damaged … everything’s water-soaked, some of our tools are ruined,” he said.

But as Prentice observed the mess, he still smiled, saying it’s important to take things in stride.

“Over the last five years, we’ve learned a lot,” he said.

“What we need now is to have some help to prepare a proper research facility so we can move this technology forward.”

Prentice and his team met challenges while getting the ultra-light airship off the ground, he says. The project has now been in the works — and the public eye — for five years.

Finally in October of that year, Prentice announced the airship would set out on its first test flight. At that time, the prototype could carry the weight of a pilot and fuel only. Its maximum speed was approximately 64 kilometers per hour (40 mph).

“I know a lot of people have probably been saying, ‘These guys have been talking about it but when are they ever going to [fly] it?'” Prentice said on Thursday. 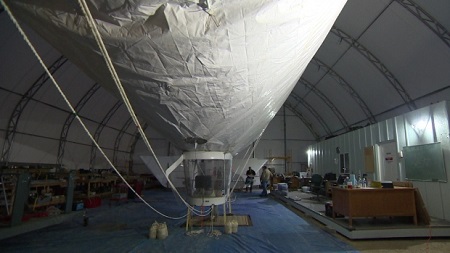 This experimental airship was shown to volunteers at St. Andrews Airport outside Winnipeg in October 2015.
Source: CBC.

The opinions of others are of little concern to him when it comes to the airship, however.

“Einstein said, ‘If when you first hear an idea if you don’t laugh at it, there’s probably nothing in it,'” Prentice said.

But aside from those who do not believe in his idea, there are people who do, he said.

“I think a lot of people now are recognizing [airships are] a viable technology.”

The only certainty about the future of the airship in Manitoba’s remote communities is that Prentice and his team are not giving up.

Plus, he said, the storm might have eliminated what he describes as a possible solution to some of the devastation in Manitoba’s northern communities, but it did not eliminate the problem.

“I look at it and say the demand has not gone away,” he said.

“The conditions in remote communities are still horrid.”

So, Prentice says he will spend two days cleaning up and saving what he can and after that, it’s back to the drawing board.

“No sense of crying over spilled milk,” he said.

This entry was posted in Airships, News and tagged airship, Asper School of Business, Barry Prentice, University of Manitoba. Bookmark the permalink.