Posted on January 10, 2014 by LighterThanAirSociety 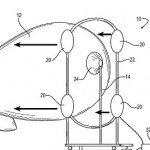 John G. Benkert and Frank A Birdsong have applied for, and assigned to Raytheon, a patent for an “Airship Docking Station”.

In light of the difficulty and high risk to equipment and personnel that docking an airship in turbulent weather and gusty winds, Benkert and Birdsong have designed a system that provides a source of high speed airflow that allows better handling of the airship during the docking process.

The U.S. Patent and Trademark Office Abstract for the Patent Application reads:

“An airship docking station includes one or more sources of relatively high speed airflow to facilitate landing an airship in turbulent or gusting air conditions. The sources of airflow are arranged to produce an envelope of airflow over the surface of the airship to stabilize the airship as it lands and is moved into a docked position where it can be secured. The docking station allows an airship to land with reduced or eliminated risk of damage to the airship, payload or ground personnel injury compared to current methods in use. The docking station and method thus ensure more consistent wind conditions adjacent the docking station. Protection from buffeting by gusting winds also facilitates automated or semi-automated airship landing with fewer or no ground personnel.”

This entry was posted in Airships, News and tagged docking station, patent, raytheon. Bookmark the permalink.