Posted on June 15, 2017 by LighterThanAirSociety 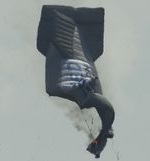 By Bill Glauber, James B. Nelson and Maddie Koss

Some of the biggest drama at the U.S. Open took place in the sky just east of the course Thursday morning when a blimp advertising for PenFed Credit Union deflated, burst into flames and crashed.

The blimp went down about 11:15 a.m. near Highway 83 and Highway 167. The crash site was about a mile from the Erin Hills golf course where thousands of people gathered for the first morning of competition.

The pilot was transported by Flight for Life from the area of the crash just after noon. No one on the ground was injured. 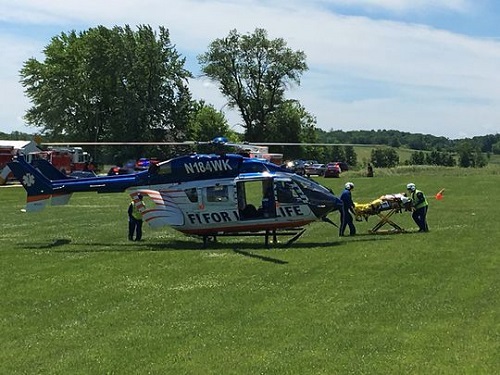 One person — presumably the pilot of the blimp— was transported by Flight for Life from the area of the crash just after noon.
Mark Hoffman / Milwaukee Journal Sentinel (Photo: Staff photo)

The pilot was the only occupant of the aircraft, and he was seriously injured with burns and other injuries, according to a news release from the Washington County Sheriff’s Office.

“The initial investigation reveals the blimp may have experienced mechanical problems prior to the crash,” the release said, adding that the department “had been in contact with FAA representatives earlier in the day and determined the aircraft was lawfully operating at the proper altitude.”

The blimp was operated by AirSign, an aerial advertising firm with operations across the country. The company website says it specializes in banner, blimps and sky writing.

The pilot remained with the blimp as it slowly descended to the ground.

“He stayed with the blimp until it went down,” a spokesman for AirSign said in a telephone interview from Florida. He said that a crew member on the ground pulled the pilot from the wreckage.

The company tweeted: “Thanks to everyone for your concerns, the blimp pilot is being taken to the hospital but is expected to be OK. No details on cause of crash.”

“It started deflating, and then it started going down,” said Bryan Rosine who noticed the blimp while he was taking a tree down.

“They were trying to give it some throttle and it didn’t go up,” he said. “Then there was a bunch of kabooms and smoke clouds.”

Another witness, Tim Guetzke and his 16-year-old son Hunter, an incoming junior at Hartford Union High School, were in the area and watching the blimp.

“The side started deflating,” Tim Guetzke said. “One side was going in. As it headed toward the ground, it caught fire.”

“It was doing fine for hours,” he said. “Hunter could see it. He said, ‘Dad, it’s deflating. I think it’s starting on fire.’ When you realize someone is in there it makes you sad.”

Golfer Jamie Lovemark said he saw the blimp while on the 5th hole.

“I was teeing off and I looked up and saw it on fire and I felt sick to my stomach,” he said. “I had the shakes. I felt terrible for the people inside. I didn’t know what was going on. It was a horrible sight.”

The blimp landed in a farmer’s field near a stand of trees and looked like a large deflated balloon. Videos show flames and explosions after the wreckage hit the ground.

The sign on the blimp advertised PenFed Credit Union, also known as the Pentagon Federal Credit Union. The nation’s third-largest credit union with assets of about $22 billion, PenFed serves about 1.5 million people with connections to the military and has branches in 10 states.

The blimp took off from a small privately operated air field not far from the crash site, said Dan Coffey, owner of the Air Strip WN75.

“They were going to use it all week,” Coffey said. “He was flying it for hours. I don’t know if the wind caught up with him or what.”

Coffey said that the accident was extremely unusual.

“These airships are FAA approved. They make sure that every one is inspected,” he said. “This is an extremely rare accident.”

A statement distributed by the United States Golf Association said the blimp was not affiliated with the USGA or the U.S. Open.

“Our thoughts and prayers are with the pilot at this time,” the USGA statement said.