Posted on January 22, 2015 by LighterThanAirSociety 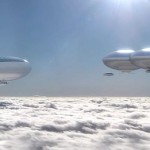 Should crewed exploration of Venus come before we try to go to Mars?

It has been accepted for decades that Mars is the next logical place for humans to explore. Mars certainly seems to offer the most Earth-like environment of any other place in the solar system, and it’s closer to Earth than just about anyplace else, except Venus. But exploration of Venus has always been an enormous challenge: Venus’s surface is hellish, with 92 atmospheres of pressure and temperatures of nearly 500 °C. 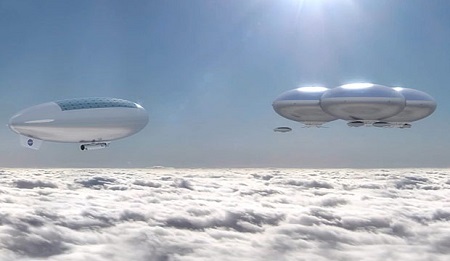 The surface of Venus isn’t going to work for humans, but what if we ignore the surface and stick to the clouds? Dale Arney and Chris Jones, from the Space Mission Analysis Branch of NASA’s Systems Analysis and Concepts Directorate at Langley Research Center, in Virginia, have been exploring that idea. Perhaps humans could ride through the upper atmosphere of Venus in a solar-powered airship. Arney and Jones propose that it may make sense to go to Venus before we ever send humans to Mars.

To put NASA’s High Altitude Venus Operational Concept (HAVOC) mission in context, it helps to start thinking about exploring the atmosphere of Venus instead of exploring the surface. “The vast majority of people, when they hear the idea of going to Venus and exploring, think of the surface, where it’s hot enough to melt lead and the pressure is the same as if you were almost a mile underneath the ocean,” Jones says. “I think that not many people have gone and looked at the relatively much more hospitable atmosphere and how you might tackle operating there for a while.” 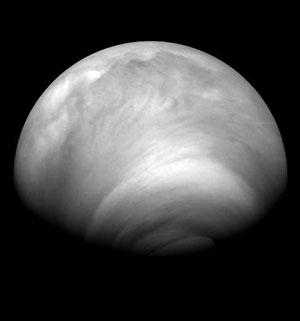 Winds around the equator of Venus would carry an airship around the planet in 110 hours.
Image: ESA/MPS/DLR/IDA

At 50 kilometers above its surface, Venus offers one atmosphere of pressure and only slightly lower gravity than Earth. Mars, in comparison, has a “sea level” atmospheric pressure of less than a hundredth of Earth’s, and gravity just over a third Earth normal. The temperature at 50 km on Venus is around 75 °C, which is a mere 17 degrees hotter than the highest temperature recorded on Earth. It averages -63 °C on Mars, and while neither extreme would be pleasant for an unprotected human, both are manageable.

What’s more important, especially relative to Mars, is the amount of solar power available on Venus and the amount of protection that Venus has from radiation. The amount of radiation an astronaut would be exposed to in Venus’s atmosphere would be “about the same as if you were in Canada,” says Arney. On Mars, unshielded astronauts would be exposed to about 0.67 millisieverts per day, which is 40 times as much as on Earth, and they’d likely need to bury their habitats several meters beneath the surface to minimize exposure. As for solar power, proximity to the sun gets Venus 40 percent more than we get here on Earth, and 240 percent more than we’d see on Mars. Put all of these numbers together and as long as you don’t worry about having something under your feet, Jones points out, the upper atmosphere of Venus is “probably the most Earth-like environment that’s out there.”

It’s also important to note that Venus is often significantly closer to Earth than Mars is. Because of how the orbits of Venus and Earth align over time, a crewed mission to Venus would take a total of 440 days using existing or very near-term propulsion technology: 110 days out, a 30-day stay, and then 300 days back—with the option to abort and begin the trip back to Earth immediately after arrival. That sounds like a long time to spend in space, and it absolutely is. But getting to Mars and back using the same propulsive technology would involve more than 500 days in space at a minimum. A more realistic Mars mission would probably last anywhere from 650 to 900 days (or longer) due to the need to wait for a favorable orbital alignment for the return journey, which means that there’s no option to abort the mission and come home earlier: If anything went wrong, astronauts would have to just wait around on Mars until their return window opened. 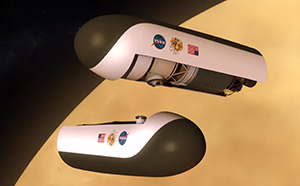 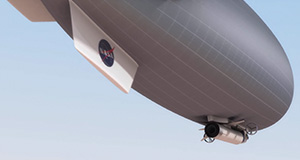 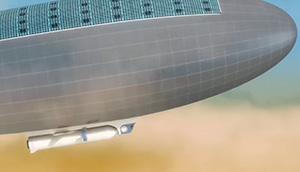 HAVOC comprises a series of missions that would begin by sending a robot into the atmosphere of Venus to check things out. That would be followed up by a crewed mission to Venus orbit with a stay of 30 days, and then a mission that includes a 30-day atmospheric stay. Later missions would have a crew of two spend a year in the atmosphere, and eventually there would be a permanent human presence there in a floating cloud city.

The defining feature of these missions is the vehicle that will be doing the atmospheric exploring: a helium-filled, solar-powered airship. The robotic version would be 31 meters long (about half the size of the Goodyear blimp), while the crewed version would be nearly 130 meters long, or twice the size of a Boeing 747. The top of the airship would be covered with more than 1,000 square meters of solar panels, with a gondola slung underneath for instruments and, in the crewed version, a small habitat and the ascent vehicle that the astronauts would use to return to Venus’s orbit, and home.

Getting an airship to Venus is not a trivial task, and getting an airship to Venus with humans inside it is even more difficult. The crewed mission would involve a Venus orbit rendezvous, where the airship itself (folded up inside a spacecraft) would be sent to Venus ahead of time. Humans would follow in a transit vehicle (based on NASA’s Deep Space Habitat), linking up with the airship in Venus orbit.

Since there’s no surface to land on, the “landing” would be extreme, to say the least. “Traditionally, say if you’re going to Mars, you talk about ‘entry, descent, and landing,’ or EDL,” explains Arney. “Obviously, in our case, ‘landing’ would represent a significant failure of the mission, so instead we have ‘entry, descent, and inflation,’ or EDI.” The airship would enter the Venusian atmosphere inside an aeroshell at 7,200 meters per second. Over the next seven minutes, the aeroshell would decelerate to 450 m/s, and it would deploy a parachute to slow itself down further. At this point, things get crazy. The aeroshell would drop away, and the airship would begin to unfurl and inflate itself, while still dropping through the atmosphere at 100 m/s. As the airship got larger, its lift and drag would both increase to the point where the parachute became redundant. The parachute would be jettisoned, the airship would fully inflate, and (if everything had gone as it’s supposed to), it would gently float to a stop at 50 km above Venus’s surface.

Near the equator of Venus (where the atmosphere is most stable), winds move at about 100 meters per second, circling the planet in just 110 hours. Venus itself barely rotates, and one Venusian day takes longer than a Venusian year does. The slow day doesn’t really matter, however, because for all practical purposes the 110-hour wind circumnavigation becomes the length of one day/night cycle. The winds also veer north, so to stay on course, the airship would push south during the day, when solar energy is plentiful, and drift north when it needs to conserve power at night.

Meanwhile, the humans would be busy doing science from inside a small (21-cubic-meter) habitat, based on NASA’s existing Space Exploration Vehicle concept. There’s not much reason to perform extravehicular activities, so that won’t even be an option, potentially making things much simpler and safer (if a bit less exciting) than a trip to Mars. 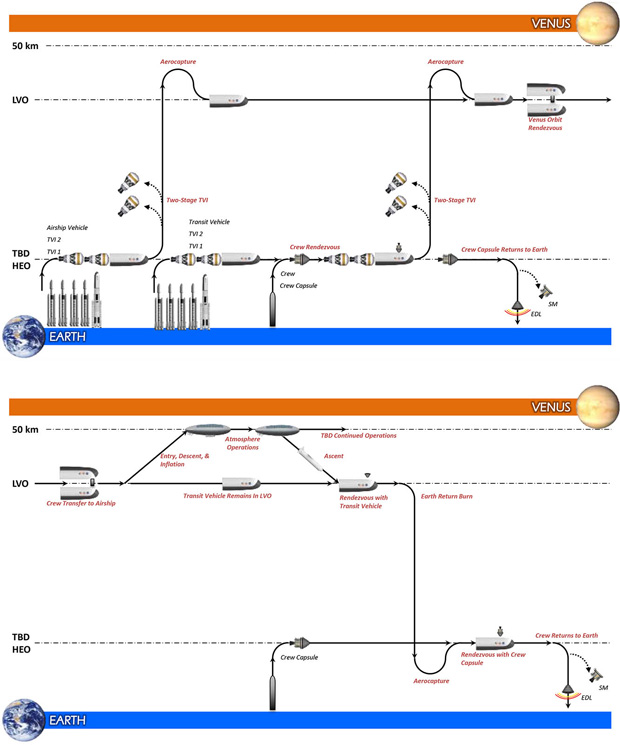 It will take multiple launches and descents to get there and back again.
Image: NASA Langley Research Center

The airship has a payload capacity of 70,000 kilograms. Of that, nearly 60,000 kg will be taken up by the ascent vehicle, a winged two-stage rocket slung below the airship. (If this looks familiar, it’s because it’s based on the much smaller Pegasus rocket, which is used to launch satellites into Earth orbit from beneath a carrier aircraft.) When it’s time to head home, the astronauts would get into a tiny capsule on the front of the rocket, drop from the airship, and then blast back into orbit. There, they’ll meet up with their transit vehicle and take it back to Earth orbit. The final stage is to rendezvous in Earth orbit with one final capsule (likely Orion), which the crew will use to make the return to Earth’s surface.

The HAVOC team believes that its concept offers a realistic target for crewed exploration in the near future, pending moderate technological advancements and support from NASA. Little about HAVOC is dependent on technology that isn’t near-term. The primary restriction that a crewed version of HAVOC would face is that in its current incarnation it depends on the massive Block IIB configuration of the Space Launch System, which may not be ready to fly until the late 2020s. Several proof-of-concept studies have already been completed. These include testing Teflon coating that can protect solar cells (and other materials) from the droplets of concentrated sulfuric acid that are found throughout Venus’s atmosphere and verifying that an airship with solar panels can be packed into an aeroshell and successfully inflated out of it, at least at 1/50 scale.

Many of the reasons that we’d want to go to Venus are identical to the reasons that we’d want to go to Mars, or anywhere else in the solar system, beginning with the desire to learn and explore. With the notable exception of the European Space Agency’s Venus Express orbiter, the second planet from the sun has been largely ignored since the 1980s, despite its proximity and potential for scientific discovery. HAVOC, Jones says, “would be characterizing the environment not only for eventual human missions but also to understand the planet and how it’s evolved and the runaway greenhouse effect and everything else that makes Venus so interesting.” If the airships bring small robotic landers with them, HAVOC would complete many if not most of the science objectives that NASA’s own Venus Exploration Analysis Group has been promoting for the past two decades. 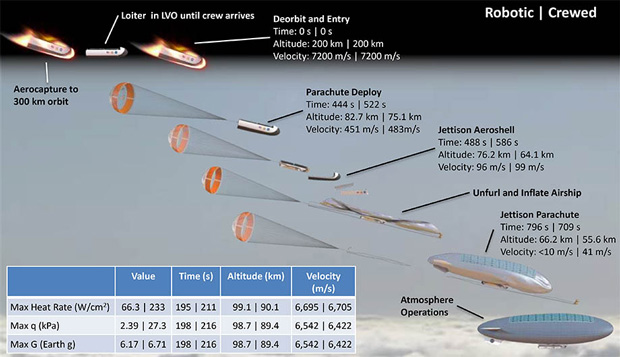 The airship will begin its plummet into the atmosphere at 7200 meters per second.
Image: NASA Langley Research Center

“Venus has value as a destination in and of itself for exploration and colonization,” says Jones. “But it’s also complementary to current Mars plans.…There are things that you would need to do for a Mars mission, but we see a little easier path through Venus.” For example, in order to get to Mars, or anywhere else outside of the Earth-moon system, we’ll need experience with long-duration habitats, aerobraking and aerocapture, and carbon dioxide processing, among many other things. Arney continues: “If you did Venus first, you could get a leg up on advancing those technologies and those capabilities ahead of doing a human-scale Mars mission. It’s a chance to do a practice run, if you will, of going to Mars.”

It would take a substantial policy shift at NASA to put a crewed mission to Venus ahead of one to Mars, no matter how much sense it might make to take a serious look at HAVOC. But that in no way invalidates the overall concept for the mission, the importance of a crewed mission to Venus, or the vision of an eventual long-term human presence there in cities in the clouds. “If one does see humanity’s future as expanding beyond just Earth, in all likelihood, Venus is probably no worse than the second planet you might go to behind Mars,” says Arney. “Given that Venus’s upper atmosphere is a fairly hospitable destination, we think it can play a role in humanity’s future in space.”