Posted on October 28, 2014 by LighterThanAirSociety 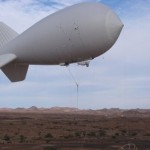 Working with the Army, Lockheed Martin is providing operational support for a Persistent Threat Detection System (PTDS) aerostat system that is being evaluated by the Department of Homeland Security (DHS) Customs and Border Protection (CBP) along the Southern border of the United States.

Currently protecting coalition forces overseas, the U.S. Army uses PTDS to help troops identify threats, track insurgents, and enhance overall readiness for the men and women in theater. With the troop drawdown, more of the systems are becoming available for other uses.

“Lockheed Martin has a long history developing aerostats, and this effort highlights the system’s potential and flexibility,” said Paula Hartley, vice president of Advanced Products Solutions for Lockheed Martin’s Mission Systems and Training business. “As the mission evolves, PTDS is able to adapt its technology for new uses to support our customers and nation.” 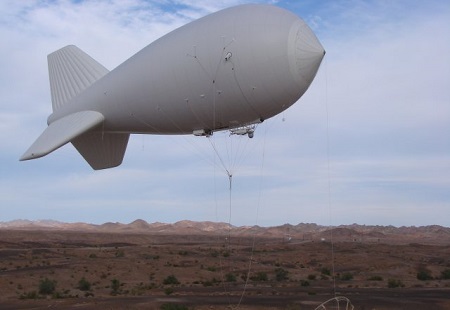 Since Lockheed Martin delivered the first PTDS in 2004, the Army has ordered 66 of the persistent surveillance systems as commanders quickly saw the benefits of having a cost-effective eye in the sky hovering over Iraq and Afghanistan providing around-the-clock surveillance.
Photo: Lockheed Martin

With the capability to provide panoramic day/night surveillance in extremely challenging weather, PTDS has been very successful in supporting CBP border protection efforts. Capable of remaining continuously aloft at high altitudes, PTDS differs from other persistent ground surveillance aerostats previously used by CBP in that it can fly at greater altitudes for longer periods of time, thereby providing 24/7 coverage to a larger area. The system can also be equipped with multiple sensors, which can be easily and quickly interchanged in order to support different types of CBP missions. PTDS offers a persistent surveillance capability not possible with manned and unmanned aircraft, which encounter surveillance-time limitations dictated by fuel consumption and payload capacity.

“PTDS is a robust system that has proven its worth protecting our forces around the world,” said Dr. Rob Smith, vice president of C4ISR for Lockheed Martin Information Systems and Global Solutions. “Using PTDS to support the CBP mission is an excellent way to leverage and maximize existing capital assets and experienced operators for border protection efforts.”

Headquartered in Bethesda, Maryland, Lockheed Martin is a global security and aerospace company that employs approximately 113,000 people worldwide and is principally engaged in the research, design, development, manufacture, integration and sustainment of advanced technology systems, products and services. The Corporation’s net sales for 2013 were $45.4 billion.