Above and beyond: New surveillance system to guard against aerial, maritime threats

Posted on October 29, 2014 by LighterThanAirSociety

Singapore’s Aerostat System – a tethered balloon that uses low-level radar to detect threats as far as 200km away – will be deployed early next year.

The Republic of Singapore will soon have an extra pair of eyes in the sky to look out for aerial and maritime threats. The Aerostat System – a tethered balloon that uses low-level radar to detect threats as far as 200km away – will be deployed early next year.

Defense Minister Ng Eng Hen announced this on Tuesday (Oct 28) at Nanyang Polytechnic, during the PRoductivity and Innovation in Daily Efforts (PRIDE) Day award ceremony. The event promotes innovation and productivity across the Ministry of Defense.

Dr Ng said with the Aerostat System, the Singapore Armed Forces will save nearly S$30 million in operating costs a year.

The system will complement the Republic of Singapore Air Force’s current suite of airborne and ground-based radars. “Our ground-based radar systems can only operate above high-rise buildings,” Dr Ng said, adding that the urban landscape in Singapore is changing, and more tall buildings are coming up.

“For a small island-state like Singapore, surveillance and early warning to give us sufficient reaction time to respond will always be a challenge but the Aerostat will improve our surveillance capabilities significantly,” he said. 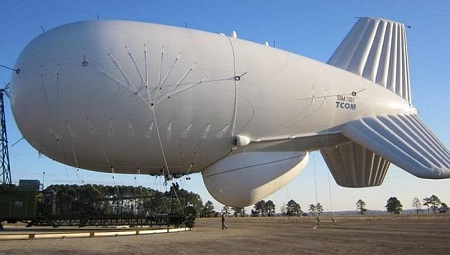 The system requires eight ground crew members to operate. The Aerostat can be tethered to a height of up to 600 meters – about twice the height of One Raffles Place building. Safety measures will also be in place to ensure Aerostat is far from flying aircraft, when deployed. The blimp will also be secured to the ground mooring station with a Kevlar tether, to withstand strong winds and lightning strikes.
Photo courtesy of Channel NewsAsia

Aerostats have been used by different agencies across the world since the 1980s as early warning systems and for radio re-broadcast.

In a Facebook post on Tuesday, Dr Ng said the “protector in the sky” will strengthen Singapore’s defenses against aerial and maritime threats.

“The aerostat will complement our ground radars to detect such threats and provide early warning. It can stay airborne for 24/7, use less manpower and cost less,” wrote Dr Ng.

He also applauded Singapore’s military planners and engineers who are “constantly coming up with new and better ideas for our nation’s defense.” 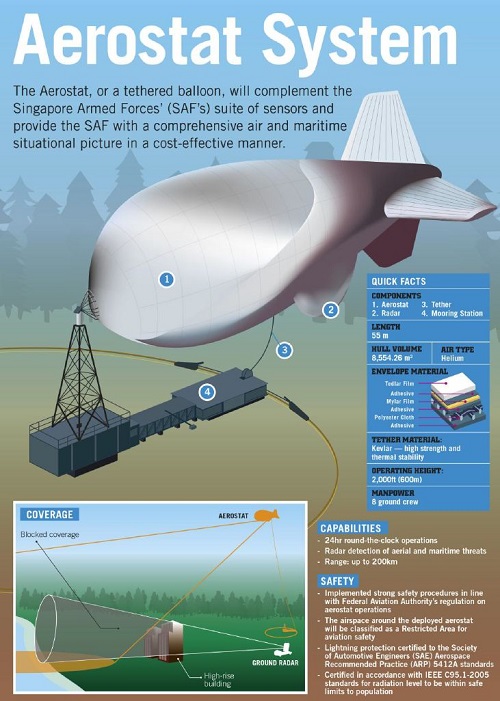