Posted on March 12, 2015 by LighterThanAirSociety 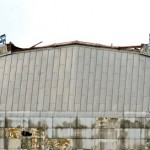 The makers of a state-of-the art airship have filed a $65 million lawsuit against the U.S. Navy after the helium-filled dirigible was crushed when part of the roof of the hangar where it was stored collapsed on it.

The suit, which was filed Monday in a Los Angeles federal district court by Aeroscraft Aeronautical Systems, claims that the Navy has refused to cover damages to the company’s namesake Aeroscraft, an experimental cargo airship capable of carrying 66 tons of cargo.

The prototype, which was being stored in a World War II-era hangar at a former Marine Corps Air Station in Tustin, Calif. that was under license to the Navy, was destroyed after a large section of the roof fell on it in October 2013.

The lawsuit claims that not only did the Navy deny a claim to cover the cost of damages, it never provided a reason as to why it wouldn’t pay. 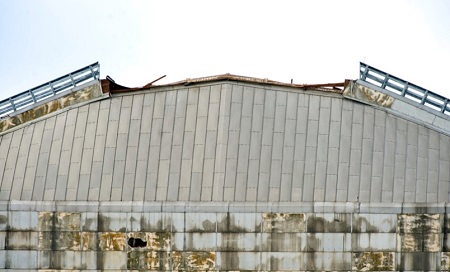 A section of a walkway on the top of the North Tustin blimp hangar appears to have collapsed, damaging a massive $35 million dirigible inside and causing a helium leak on Monday, Oct. 7, 2013 in Tustin, Calif. The partial roof collapse was reported at 7:45 a.m. at the former military base, said Capt. Steve Concialdi of the Orange County Fire Authority. Hazardous-material crews were called to stop the leak, he said.
Photo Credit: Sam Gangwer – The Orange County Register

“At no point did they explain why they denied the claim,” James Gallagher, a Los Angeles-based attorney representing Aeroscraft, told FoxNews.com. “It very frustrating for us because our experience is that when the government denies a claim, there is usually an explanation but we haven’t gotten a single one on this case.”

Gallagher added that damage to the Aeroscraft prototype has ruined future funding for the company and that it is left with no choice but to seek replacement costs from the federal government.

“This was a huge part of their business before it happened,” he said. “They were in the middle of funding talks with Wall Street when this happened and lost opportunities as a result.” 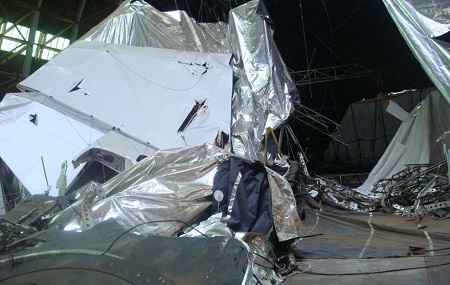 Gallagher and his team of attorneys also claim the incident could have been avoided, pointing out in their filing that they uncovered documents from as far back as 1997 showing that the Navy was informed then that sections of the hangar’s roof were in need of “critical repair.”

Officials for the Department of Justice, which is handling the lawsuit on the Navy’s behalf, did not immediately return requests for comment.

Aeroscraft Aeronautical Systems touted the cargo airship’s potential to carry more cargo more efficiently when it was first brought to Tustin in early 2013, saying that it would provide the U.S. military with an advantage on the battlefield and greater capacity to save more lives during natural disasters. 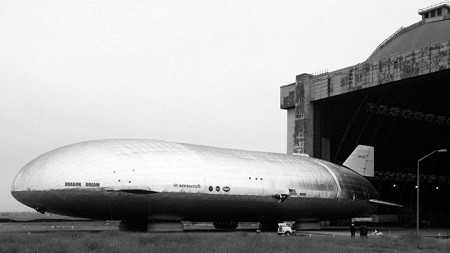 The Aeroscraft at its storage hangar at a Navy-operated facility in Southern California.
Source: FoxNews.com/Aeroscraft

Both the Department of Defense and NASA invested a combined total of $35 million in the prototype due to its potential to one day carry more cargo than any other aircraft to disaster zones and military bases.

The lighter-than-air vehicle is not a blimp or a zeppelin because it has a rigid structure made out of ultra-light carbon fiber and aluminum underneath its high-tech Mylar skin. Inside, balloons hold the helium that gives the vehicle lift.

The airship functions like a submarine, releasing air to rise and taking in air to descend, Aeroscraft mechanical engineer Tim Kenny said in reports at the time. It can take off vertically, like a helicopter, then change its buoyancy to become heavier than air for landing and unloading.

“It allows the vehicle to set down on the ground. And then when we want to become lighter than air, we release that air and then the vehicle floats and we can allow it to take off,” he said.