Posted on August 1, 2016 by LighterThanAirSociety 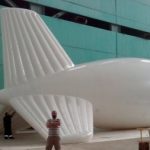 Israeli aerostat manufacturer RT LTA Systems announced on 26 July that it was launching a new family of platforms under the name ‘SkyGuard’ that are designed to carry far heavier payloads for longer periods than its existing SkyStar family.

RT said its new Aero-T subsidiary will develop and produce the SkyGuard family and has already completed development of the SkyGuard 1.

The SkyGuard 1 takes the form of an egg-shaped ‘blimp’ rather than the spherical shape of the SkyStar. It can carry payloads weighing up to 90 kg and reach altitudes of up to 1,000 m for long-endurance missions, according to RT. 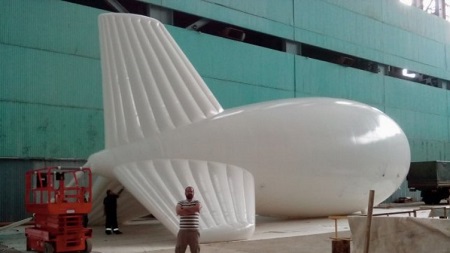 “Taken together, these abilities will allow the aerostat to operate continuously for at least seven days without maintenance,” RT said.

In comparison, the largest SkyStar has a 50 kg maximum payload weight and 72-hour endurance.

As with the SkyStar, the SkyGuard 1 is unpowered and tethered to a ground control station.

“Aero-T’s new product uses the most high-end technology in its field and its qualities compete with the leading companies in the large aerostat market,” said Rami Shmueli, CEO of RT and Aero-T.

SkyStar aerostats are in service with a range of clients, including the Israel Defense Forces, and are mainly used for aerial surveillance around specific facilities.