Posted on November 2, 2015 by LighterThanAirSociety 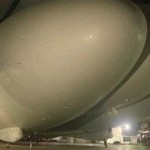 The world’s largest aircraft reached another milestone over the weekend when it received its first helium fill and was floated for the first time.

Hybrid Air Vehicles’ Airlander is a 92m (302 ft) long platform that combines the characteristics of fixed wing aircraft and helicopters with lighter-than-air technology.

The helium fill and floatation mark another step toward Return to Flight for the aircraft, which is housed in a former airship hangar in Cardington, Bedfordshire.

Airlander was moved the length of the 248m (814 ft) hangar to get to the building’s front doors, a procedure that involved four fork lift trucks at each corner of the aircraft, each carrying a 2-ton block of cement and restraining rope.

Airlander’s engines, fins and Mission Module will be now be finalized and integrated onto the aircraft during November and December. From early 2016 a series of ground tests will take place inside and outside the hangar ready for first flight during the first quarter of 2016.

“Seeing the Airlander come to life and floating was simply breath-taking,” said Mike Durham HAV’s technical director. “This is a key moment for the UK’s aerospace industry in getting this unique aircraft ready for flight.”

Once operational, Airlander will be able to carry up to 10 tons of cargo and fly half way round the world on a single tank of fuel. Furthermore, Airlander can take off and land from a range of remote environments including water, desert, ice and fields.

In passenger configuration, Airlander will carry 48 guests and the aircraft is currently undergoing market testing of an overnight luxury passenger service and a business city-center to city-center sleeper service.

According to Hybrid Air Vehicles, Airlander is the global leader in a $50bn market for this form environmentally friendly aircraft technology.

So far, Airlander has secured over £60m of customer funding, more than £6m of grants and over £12m of equity funding. Further funding is being raised ahead of a planned Initial Public Offering on Alternative Investment Market (AIM).

Hybrid Air Vehicles is also building an order book of commercial and military orders for trials and demonstrations and for aircraft sales. The company expects that 1,800 new jobs will be created in the UK in the next 5 years.