Posted on October 14, 2013 by LighterThanAirSociety 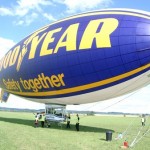 A highly experienced pilot of a Goodyear-branded airship that fell to the ground in flames in Riechelsheim, Germany, in June 2011 appears to have been responsible in part for the errors that led to the fatal crash during a safety tour across Europe, sponsored by the American tire company.

According to a final report on the accident by German aviation safety agency BFU, the American Blimp Corp. A-60+ blimp was likely overloaded when the pilot departed Riechelsheim Airfield for a 2-hr. sightseeing flight on June 12 with three passengers. On the previous flight that day, the pilot experienced a tail strike that broke the wheel from the airship’s rudder. The blimp was also having troubles with a microphone button that was jamming, leading the pilot at one point to send text messages to his ground crew during the accident flight.