Posted on May 7, 2017 by LighterThanAirSociety 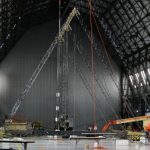 Goodyear’s third NT airship is starting to come together.

Workers at Goodyear’s Suffield Township blimp base are at the beginning stages of assembling the last of three NT, or New Technology, airships for the Akron tire maker. 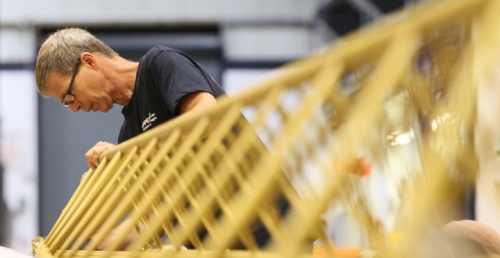 Heiko Eckleben, airship mechanic with the German Zeppelin Corporation, works on the internal frame, or longeron, as construction of the semi-rigid blimp Goodyear Zeppelin NT is underway at the Goodyear Wingfoot Lake blimp hangar. The NT airship will be close to 247 feet long.
Photo: Mike Cardew/Akron Beacon Journal.

This new blimp — Goodyear still calls its next-generation, semi-rigid airships “blimps” — will become a familiar sight for years in Akron-area skies. Its home will be the blimp base next to Wingfoot Lake in Portage County.

“It should be ready to launch in the spring [of 2018],” Goodyear spokesman Ed Ogden said. “It’s been fun to watch these come together.” 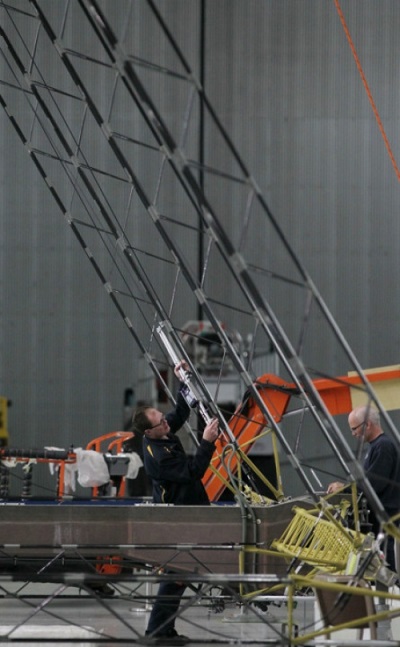 Right now there’s not much dramatic to see. Parts of the internal aluminum and carbon fiber inner skeleton are being assembled on the main hangar floor. Other work is taking place in the interior workshop area. Typically there are no more than four people working on the project at any one time. More people will be needed at later stages, including when the helium-holding envelope is carefully pulled over the frame. 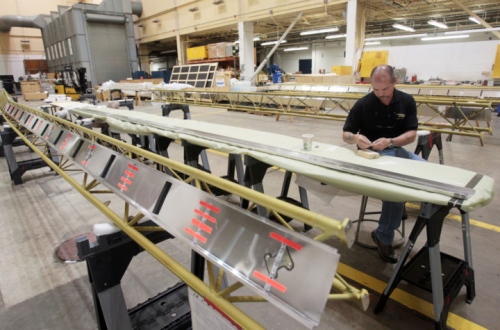 Assembly will continue until a scheduled two-month hiatus in summer, then resume in the fall, Ogden said. The work being done now takes time and is not dramatic, he said. 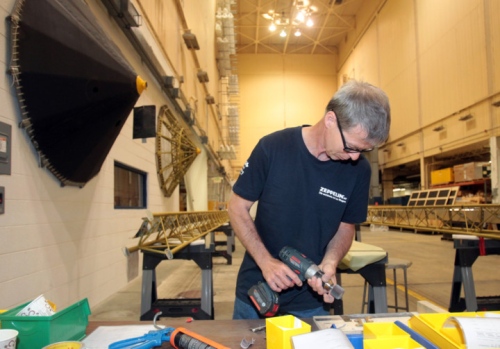 Heiko Eckleben, airship mechanic with the German Zeppelin Corporation, works on a part for the internal frame, or longeron, at the Goodyear Wingfoot Lake blimp hangar. Nose cones from past blimps hang on the wall behind him.
Photo: Mike Cardew/Akron Beacon Journal.

“We’re installing these wiring channels along the longerons,” Samples said. “They’re each individually bonded to the longerons for reasons of lightning protection.”

Out on the hangar floor, Thomas Neudert and Markus Draeger, both of Zeppelin, carefully measured such things as the tension of the under-construction frame.

Goodyear’s original NT airship, Wingfoot One, first flew March 17, 2014. The blimp is now based in Florida. 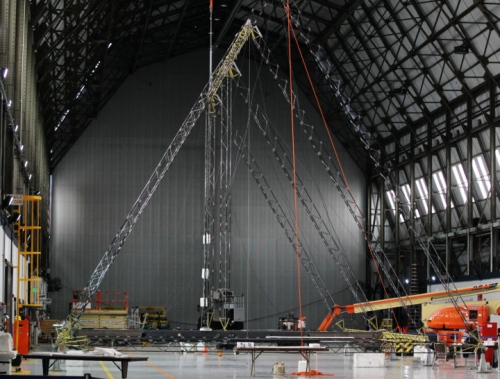 Triangular frames are suspended in the hagar as construction of the final semi-rigid blimp Goodyear Zeppelin NT is underway at the Goodyear Wingfoot Lake blimp hangar. The airship should be ready to launch in the Spring.
Photo: Mike Cardew/Akron Beacon Journal.

Then the second one, given the name Wingfoot Two, first flew in March 2016 and remains temporarily stationed at the Suffield Township base.

This new airship has not been given a name, but you could probably put a safe bet on the moniker Wingfoot Three.

Wingfoot Two will remain in the area likely until early October, when it will fly off to its permanent base in California.

For the time being, Wingfoot Two can still squeeze inside the hangar while the new airship is being built. But at one point in the project, there will be room for just the one under-construction airship. 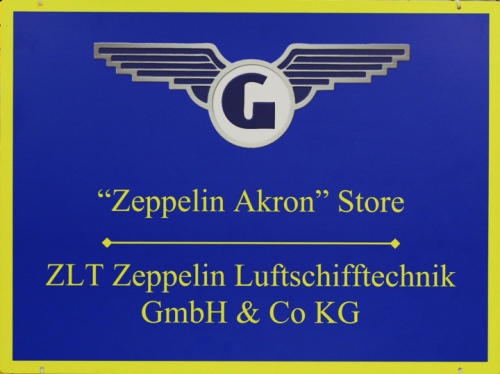 A sign on a parts cage in the Goodyear Wingfoot Lake blimp hangar. Construction is underway for the final semi-rigid blimp Goodyear Zeppelin NT that will be based at Goodyear’s blimp base at Wingfoot Lake.
Photo: Mike Cardew/Akron Beacon Journal.