Posted on February 20, 2015 by LighterThanAirSociety 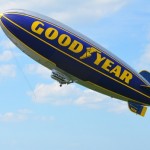 The Goodyear Tire & Rubber Company  announced today that it will donate the gondola from the Spirit of Goodyear blimp to the Crawford Auto Aviation Museum of the Western Reserve Historical Society in Cleveland.

“It has been wonderful collaborating with Goodyear to add this blimp gondola to the Crawford Auto Aviation Museum,” said Kelly Falcone-Hall, president and CEO of the Western Reserve Historical Society.

The gondola is the compartment underneath the blimp’s envelope where the pilot and passengers ride. It is 23 feet long and weighs 3,400 lbs. 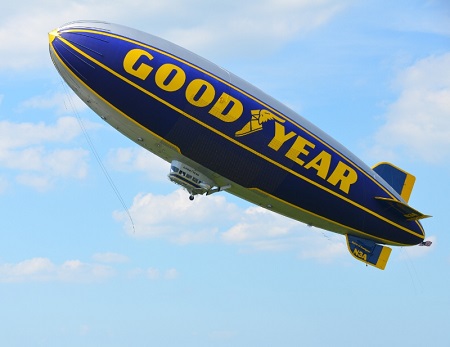 In 2014, the gondola won a place in the Guinness Book of World Records as “The Longest Continuous Use for a Blimp” for its 14 year run with the Spirit of Goodyear. After covering its final event, NASCAR’s 2014 Daytona 500 race, the blimp was retired.

The gondola appeared over some of the world’s largest sporting events such as the Super Bowl in 1990, 1994 and 1995, Major League Baseball World Series games in 1982, 1983 & 1984, The Kentucky Derby, the Daytona 500, U.S. Open tennis and golf, NCAA football, including the Cotton Bowl in 1990, NCAA Final Four basketball and NFL games. In addition, well-known celebrities, such as David Letterman and astronaut Dr. Sally Ride, have flown in the gondola.

“This is a natural alignment between two organizations sharing deep ties to Northeast Ohio and a prominent role shaping and sharing the history of the aviation and automobile industries,” said Dave Beasley, Goodyear’s director of airship operations. “The Crawford Museum is an ideal venue to exhibit one of Goodyear’s most successful airship gondolas.”

Goodyear has donated other airship components to museums such as the Smithsonian National Air and Space Museum in Washington, D.C.; the New England Air Museum in Windsor Locks, Conn.; MAPS Air Museum in North Canton, Ohio and the National Naval Aviation Museum in Pensacola, Fla.

Goodyear was founded in Akron, Ohio in 1898 and introduced its first airship in 1919 and the first interstate trucking operation, the Wingfoot Express, in 1917. For a number of years, the company held its annual picnic at Euclid Beach Park near the Crawford Museum. The park’s Grand Carousel is now an exhibit at the museum and is in close proximity to the Goodyear gondola. 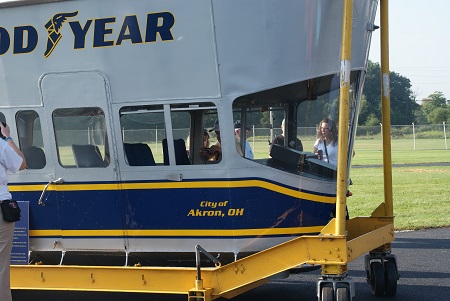 The Spirit of Goodyear gondola on display at the christening ceremony of Goodyear’s new blimp, Wingfoot One, on August 23, 2014.
Photo courtesy of Alvaro Bellon