Posted on August 20, 2015 by LighterThanAirSociety

When to see the tandem flights (times approximate):

How to tell the two apart:

In less than a week, Goodyear’s Spirit of Innovation blimp — the last of the Akron tire maker’s GZ-20A models — will fly from its temporary home in Suffield Township to its new base in California. Its sister GZ-20 ship, the Spirit of America, was officially decommissioned last week in the West Coast state. 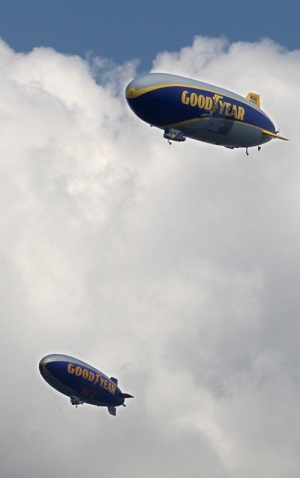 The Spirit of Innovation and Goodyear’s new high-tech, semi-rigid airship, Wingfoot One, will make tandem flights Friday and again Monday over the Akron area. The two last flew together over the weekend.

“This is probably the last time to see a 20 model and the new model together,” said Doug Grassian, spokesman for Goodyear’s blimp fleet.

The Spirit of Innovation will leave Wednesday on a three-week trip that will take it to California.

Wingfoot One, in turn, is scheduled to leave from the Suffield Township blimp base on Sept. 30 for its permanent base in Florida. A new semi-rigid airship identical to Wingfoot One is now being built at the base and likely will take its first flight in early March. 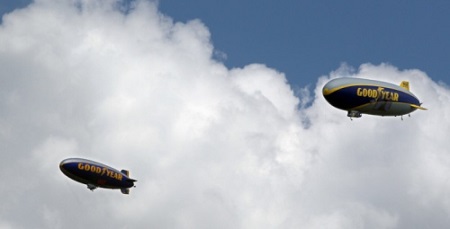 The GZ-20 model is considered a true blimp — there is no internal supporting framework, simply a large helium-filled bag and a gondola strapped on underneath. The design dates back to the late 1960s.

Wingfoot One, which first flew in March 2014, is a Zeppelin NT (New Technology) airship. It has a lightweight aluminum and carbon fiber frame and modern technology. The German design dates back to the late 1990s.

The Spirit of Innovation first flew in 2006. It was based in Pompano Beach, Fla., before returning to Ohio this year as part of Goodyear’s reshuffling of its blimp fleet.

This entry was posted in Airships, Blimps, Semi-Rigid and tagged airship, Akron, goodyear, Spirit of America, Spirit of Innovation, Wingfoot Lake, Wingfoot One. Bookmark the permalink.