From the archive, 20 August 1936: From New York to Frankfurt on the Hindenburg

Posted on August 26, 2014 by LighterThanAirSociety 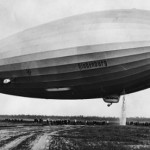 Wonderfully smooth compared to aeroplane travel, one has a feeling of complete security, says reporter on board the Zeppelin.

On Sunday, August 9, we drove down from New York to Lakehurst, New Jersey, arriving about 9:15 in the evening, and parked the car immediately outside the hangar. We had been officially warned to have only 40 lb of luggage each and to have no cameras or drink in our bags. We had three bags – two light-weight aeroplane suitcases and one old-fashioned leather kitbag.

After waiting to see the Newark aeroplane come in, bringing the last of the Hindenburg’s passengers, we said goodbye to our friends and were driven out to the Zeppelin, looming up across the airport, half a mile away. We climbed on board and saw our bags placed in our cabin. 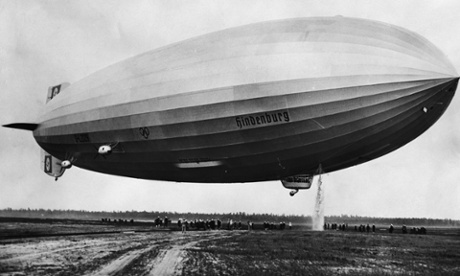 The plan of the Zeppelin’s passenger accommodation is simple. On the a lower deck there are shower-baths on the port side, and on the starboard side the bar and smoking-room. The upper deck has the twenty-five double cabins in the middle, flanked on the port side by the dining saloon and on the starboard side by the lounge and reading room. The windows have twelve-inch sills about waist high, so that one can rest on one’s arms while looking out.

Soon we realised that we were already under way. There had been no commotion, no whistles, no noise. The engines were warming up when we came aboard, and now we simply slid gently into the sky. It was ten-thirty, a little earlier than the usual time of departure. After rising five or six hundred feet we circled round the aerodrome, and then bore off towards New York. It was a beautiful night, and the lights of Asbury Park and other coast resorts stood out clearly. We neared New York and soon were over Staten Island, then up the Hudson, flying quite low, and over the city from 72nd Street, across to 110th, and Fifth Avenue, and up over Hunter’s Island, and along the Connecticut coast. After passing over New Haven and New London we bore off over Providence and Boston, and then out to sea, headed for Nova Scotia.

Once over the sea it was too dark to see anything but the waves, picked out by our powerful vertical searchlight, and soon we all turned in. When going on board we were not searched for matches, but shortly after the airship started a steward passed a basket round among the fifty passengers requesting the surrender of all matches and lighters.

The sleeping cabins proved to be small but comfortable: no windows, but an adjustable air-blower in the ceiling; plenty of room for bags under the lower berth and an old-fashioned ship’s folding washstand looking like porcelain but actually made of celluloid. On the wall over each berth was a picture of a burning cigarette with a superimposed red cross – a gentle reminder not to smoke.

I woke about 6:30 next morning to find we were over Nova Scotia, moving on to Newfoundland and the Straits of Belle Isle. Passing over farms it was amusing to see the panic chickens and cows were thrown into by the sound of our engines.

Zeppelin-flying is wonderfully smooth compared with the sudden swooping and dippings of aeroplane travel. One has a feeling of complete security. Occasionally the great ship dips or rolls a little, but so majestically that one does not mind it in the least. It was not until after luncheon that we saw the last of Labrador and headed out over the open Atlantic. The rest of the day was uneventful, and most of the passengers spent the time writing innumerable postcards to be posted on the Hindenburg with its special stamps.

About ten o’clock on Tuesday, August 11, we approached the Scilly Islands, and a steward came around collecting all cameras. Soon England loomed up ahead and Land’s End was identified. We realised then that, thanks to the fuss a section of the press has made about it, England was not to be flown over. Having spent four or five summers in Cornwall and Devon it was not hard to pick out the old landmarks, but soon it began to cloud over and we only got occasional glimpses of the coast. We missed Plymouth entirely, but managed to recognise the Isle of Wight and the white cliffs of Dover.

The fog now thickened so that only occasionally could one see the sea directly below, and we passed over the Dutch coast before we knew it. Once over the land the fog cleared a little and we could see spotlessly laid out Holland, with its canals, dikes and windmills. We passed over many towns which we were unable to identify, but after crossing the frontier at the River Maas we soon struck the Rhine and followed it up over Cologne and Coblens and so to Frankfurt. It was a quarter to eleven at night when, after circling Frankfurt, we came softly down on the landing-field to pick up the mooring mast, which in turn towed us into the immense, brightly lit hangar. We had made the 4,000-mile crossing from New York in 43 hours, 49 minutes – a new Atlantic record.

Just under a year after this piece was published, the LZ 129 Hindenburg caught fire at Lakehurst Naval Air station. Thirty six people were killed.