Airships That Carry Science into the Stratosphere

Posted on August 27, 2014 by LighterThanAirSociety 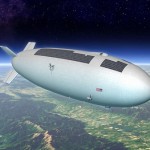 By Joshua A. Krisch

Modern Research Borne on a Relic

Airships are dusty relics of aviation history. Lighter-than-air vehicles conjure images of the Hindenburg, in its glory and destruction, and the Goodyear Blimp, a floating billboard that barely resembles its powerful predecessors.

But now engineers are designing sleek new airships that could streak past layers of cloud and chart a course through the thin, icy air of the stratosphere, 65,000 feet above the ground — twice the usual altitude of a jetliner. Steered by scientists below, these aerodynamic balloons might be equipped with onboard telescopes that peer into distant galaxies or gather oceanic data along a coastline. 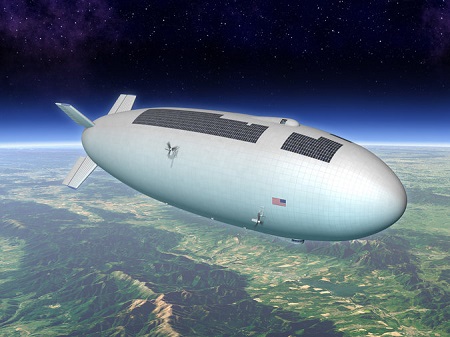 An artist’s rendering of a stratospheric airship in flight.
Image: Keck Institute for Space Studies/Eagre Interactive

“Stratospheric airships could give us spacelike conditions from a spacelike platform, but without the spacelike costs,” said Sarah Miller, an astrophysicist at the University of California, Irvine.

High-altitude airships are still in their relative infancy. None has ever flown at 65,000 feet for longer than eight hours. But a recent study from the Keck Institute for Space Studies at Caltech suggests that a more capable airship may not be far-off. And NASA is expected to sponsor a contest to build better airships, breathing new life — and funding — into the idea.

These airships would not be the first vehicles to venture into the stratosphere, of course. Rockets and satellites routinely whiz past 65,000 feet into earth orbit and beyond, and weather balloons already bob about in the upper reaches of the atmosphere.

“Balloons have been around for 200 years, so everybody thinks, well, gosh, it’s such old technology, how hard can it be?” said Steve Smith, an aerospace engineer who in 2005 designed one of the first successful stratospheric airships. “That’s the farthest thing from the truth.”

Unlike free-flying weather balloons, a blimp can be actively maneuvered, providing the control necessary to carry out advanced missions with expensive equipment. But that maneuverability is compromised the moment it begins to lose its aerodynamic shape.

For that reason, airship design is a balancing act. During the day, the helium inside the balloon warms and expands; at night, it contracts as the temperature drops.

“That’s the real technical challenge,” Mr. Smith said. “You want enough gas in there so that it won’t collapse at night, and strong materials so it won’t burst during the day.”

This problem is compounded in a stratospheric airship, which must maintain its aerodynamic shape as it ascends through rapid temperature and pressure changes between layers of the atmosphere. For Mr. Smith’s first successful stratospheric airship, the Hi-Sentinel 20, he chose a milky white polyester fabric that was tear-resistant and highly flexible.

The United States Army commissioned test flights of the Hi-Sentinel 20 to determine whether blimps could hoist communications satellites above enemy territory. The airship took off from New Mexico in 2005 and remained aloft only about eight hours, but it proved that an unmanned blimp could be steered through the stratosphere by a team of engineers on the ground.

Other test ships — the Hi-Sentinel 50 and the Hi-Sentinel 80 — were also successful. But the Army’s interest waned with the end of the Iraq war, leaving Mr. Smith and his team short on funds. In search of a new market, he approached scientists with his promise of an inexpensive aircraft that could carry remote-controlled telescopes above the clouds.

Enter Sarah Miller, who was then studying for her doctorate in astrophysics at Oxford. “I took one look at the picture in the press release and I said, ‘Oh, you could put a telescope on that,’ ” she recalled.

Her research on hydrogen emissions in early galaxies had been stymied by a lack of space-based instrumentation — even the Hubble Space Telescope was incapable of studying these particular emissions — and she had been looking for a more convenient way to get her experiments above the clouds.

But after a few phone calls, it became clear to her that stratospheric airships were not ready to play host to her research. Mr. Smith’s successful test flights had remained in the stratosphere only a matter of hours, a time limit that would make long-term research impossible. And Hi-Sentinel had never been tested with heavy scientific equipment on board.

“They weren’t at the technology readiness level that we’d entrust a large mission to them, or even a small mission, for that matter,” Dr. Miller said. 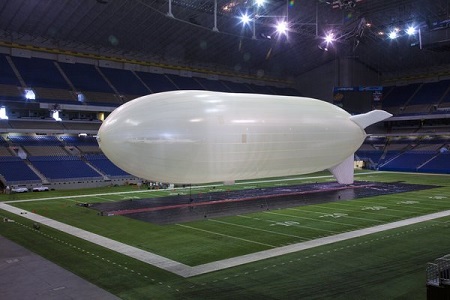 A Hi-Sentinel airship being tested in the Alamodome in San Antonio. When it was first successfully tested, in 2005, military interest was high, but it waned after the end of the Iraq war.
Image: Southwest Research Institute

And while satellites end their missions by falling to earth, incinerated beyond repair, airships could theoretically land, swap out their payloads and lift off for another round of research.

As part of the study, Dr. Miller and her colleagues asked other researchers whether they thought they might benefit from access to a stratospheric airship. To their surprise, they found that climate scientists were just as interested as cosmologists were in developing a low-cost, reusable platform for their research.

“Really, there are two very broad scientific applications of stratospheric airships,” said Jason Rhodes, an astrophysicist at NASA’s Jet Propulsion Laboratory and a co-author of the study. “You can look up and do astronomy, or you can look down and do earth science.”

For years, climate scientists have used low-altitude blimps — and their lighter-than-air cousins, weather balloons — to sample atmospheric gases and have a bird’s-eye view of local ecosystems. But high-endurance, high-altitude airships would allow scientists to study phenomena like the carbon cycle over extended periods at varying altitudes, and sample some of the less-understood greenhouses gases that contribute to climate change.

Meteorologists could fly stratospheric airships over hurricanes and tropical storms, tracking extreme weather in real time. Geologists told Dr. Miller’s team that they would use such airships to explore layers of volcanic plumes.

The only problem, the team found, is that stratospheric airships are expensive and complicated to test. Many qualified engineers had fled the lighter-than-air market after their projects were scrapped for lack of funds. To revitalize the airship market, the Keck study suggested that an institution offer a prize to the first civilian team to build a better stratospheric airship

In April, Dr. Rhodes took the Keck study’s suggestion to his NASA colleagues. Keck studies carry substantial weight with NASA: A recent Keck paper suggested that the United States lasso an asteroid, a highly unconventional plan that NASA hopes to execute in 2018.

Dr. Rhodes proposed that NASA fund a Centennial Challenge to bring engineers back into the airship market. Centennial Challenges offer millions of dollars in prize money to civilian teams that build innovative technologies for NASA missions. Over the next few months, Dr. Rhodes will research and refine the rules of the challenge, and explore how to push the limits of airships’ payload and endurance. If NASA accepts the terms of the challenge, the race for a science-worthy stratospheric airship will begin shortly afterward.

Airships would not be the only research platforms in the stratosphere. Free-floating balloons routinely fly at 65,000 feet and higher, tethered to expensive scientific equipment. Barth Netterfield, an astrophysicist at the University of Toronto who was not involved in the Keck study, has been launching lighter-than-air telescopes over Antarctica for years.

But he said powered airships would probably serve a different purpose from his simpler balloons.

“We don’t care where we are as long as we’re up,” he said. “So I’ll launch from Antarctica, and the balloon just floats around there. That’s fine.”

Powered airships, by contrast, could provide a level of reliability that scientists need for advanced, expensive missions. Like conventional space satellites, balloons often crash into the sea, ending their voyage by destroying everything aboard.

“With a free-flying balloon, you may get stuck dropping your payload into the ocean,” Dr. Netterfield said. “With a powered airship, you can bring your payload down exactly where you want to.”

Airship designers will face other obstacles, he said, including the question of weight. “The big challenge is going to be getting the payload up to a useful mass for scientific experiments, and that’s about one ton,” he said, adding: “It’s a long road ahead. But if they pull it off, it could be quite interesting.”