Posted on January 7, 2014 by LighterThanAirSociety 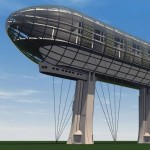 Castle in the air? No, airship! 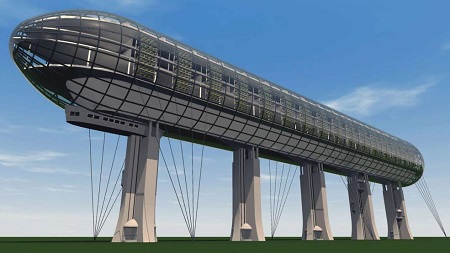 This Zeppelin is guaranteed not to crash and burn. The luxurious “horizontal skyscraper” is to stand on pillars. The building location has not yet been defined.
Image: Fredy Iseli

Unlike the Zeppelin developed in the 1920s in Friedrichshafen at Lake Constance, this airship won’t fly. It will stand firmly on the ground on five pillars, each 30 meters high (98.5 ft). There will be 500 hotel suites in this 236-meter (774 ft) long, six story high capsule.

The building will have solar panels to provide its electrical requirements. Also, Iseli wants to use an environmentally friendly building material made ​​from recycled paper, which he has developed. 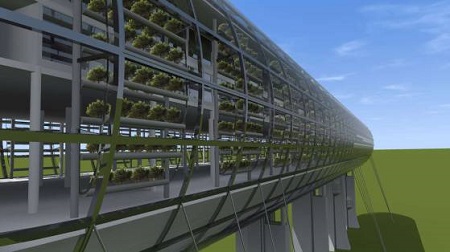 Cost of the project: 250 million Swiss francs (200 million €, US$ 275 million) – an investor has yet to be found. Iseli speculated that a cruise ship company might provide the funding. He sees his hotel as a luxury liner; tourists would stay in the Zeppelin and explore the region on “shore leave”. This concept could eventually boost tourism in eastern Switzerland.

However, the airship is still looking for a “mooring mast”. The preferred site would be the city of Friedrichshafen, where Zeppelins were born, and today are being built again. It might be easier to obtain a building permit in one of the highway rest area/parking plazas in the communities of Rorschacherberg and Goldach, with views of Lake Constance. It will probably take some time before the Zeppelin can really land. “If we could begin construction in the next five years, that would be good,” the architect commented.