Posted on January 6, 2014 by LighterThanAirSociety 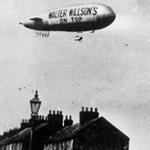 It was ahead of its time and ultimately it would end in failure, but you certainly can’t fault the ambitions of the Airship Development Company.

On Inside Out you’ll see how from its base at Cramlington in Northumberland, it hoped to conquer the whole of 1930s Britain with a new concept – aerial advertising by airship. 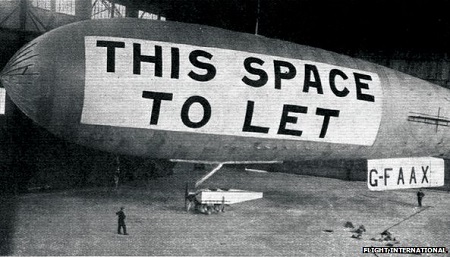 The AD-1 airship in the Cramlington hangar in late 1929.
Photo: BBC.co.uk/Flight International

On Inside Out you’ll see how from its base at Cramlington in Northumberland, it hoped to conquer the whole of 1930s Britain with a new concept – aerial advertising by airship.

Prior to this, daring aeroplane pilots would loop the loop leaving a trail of smoke plumes to spell out a word or phrase. Skywriting though is short lived. 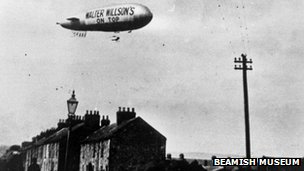 Walter Willson’s advertising campaign would have been a real eye-opener. This picture was taken above Tudhoe Village.
Photo: BBC.co.uk/Beamish Museum

Using a slow moving airship as a canvas would be an eye-catching way for a company to get its message over to those on the ground.

The first recorded flight of it carrying their slogan – “Walter Willson’s on top” was on 31 May, 1930.

The AD-1 flew for five hours over the North East, but Captain Jack Beckford-Ball picked up a two guineas fine for flying too low over a farm in Ebchester. 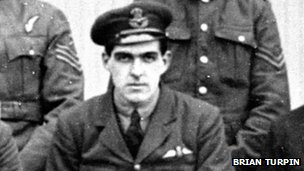 Newspaper reports at the time said it frightened a horse which then bolted and injured itself so badly it was unable to work.

For a while the airship was a familiar sight as it toured around Tyneside, Ashington, Morpeth, Blyth, Durham, Darlington, Bishop Auckland, West Hartlepool and Sunderland.

The company had set up a base at Cramlington because it had one of the few airship hangars that had survived after the First World War.

Their expertise was invaluable as the new airships were based on the same design used by the military.

However business was slow. Convincing other companies to advertise wasn’t easy.

In need of cash and with winter approaching it was clear the airship would be best plying its trade over larger populations such as London.

In 1930 the ship and crew headed south. They found sheltered moorings in the lee of some trees at a girls’ school at East Horsley in Surrey.

A publicity trip around Big Ben and St Paul’s proved irresistible but the crew got into difficulties. 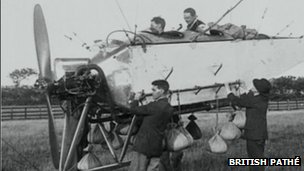 Ready to launch – crew and gondola of the AD-1 Airship.
Photo: BBC.co.uk/British Pathé

A cable snagged, jamming the controls and one of the men had to climb out of the gondola to try and manually steer the rudder while the engine started to splutter and threaten to cut out.

Despite this and several other setbacks they landed a contract with a tobacco firm to fly over Belgium.

By coincidence they had just arrived on the continent when the large British airship, the R101,attempted to make its first long distance journey to India.

The crash of the prestigious airship shocked the nation. There were mechanical problems, but it had also encountered stormy weather which two days later would claim the AD-1

It was torn from its moorings and the envelope was ripped by neighboring trees.

With no income coming in and no prospect of surviving through to the following summer, the Airship Development Company called it a day. 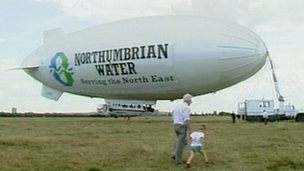 It wouldn’t be until the 1980’s that the North East would see an advertising airship over its skies again. With the privatization of the water industry, Northumbrian Water hired a blimp to mark the sell off.

One thing hadn’t changed over the intervening decades. High winds meant that for some of the time it was grounded at its base on Newcastle’s Town Moor.