Posted on October 27, 2014 by LighterThanAirSociety 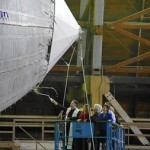 Igor Pasternak plans to build not just a bigger model of an experimental air freighter but an entire fleet. Aeroscraft was planned as a gigantic air freighter that could carry heavy cargo to remote parts of the world.

A small crowd, including a priest and five members of Congress, gathered in a giant hangar in Tustin this week to christen Igor Pasternak’s latest airship. 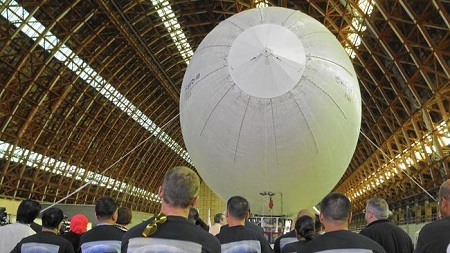 As the white helium-filled craft floated just above the hangar’s floor, the gathering of VIPs congratulated Pasternak on selling the flying machine to a Mexican company.

But the crowd seemed keenly aware that this wasn’t the airship — the one that Pasternak, a Ukrainian immigrant and the chief executive of Worldwide Aeros Corp., had devoted himself to for decades. 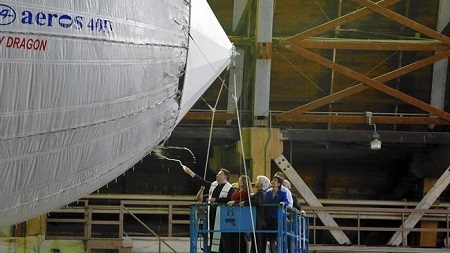 That ship, or what is left of it, sat in pieces nearby in another hangar on Tustin’s former military base.

One year ago, a 20-by-20 foot section of the ceiling of that World War II-era hangar let go, falling 17 stories and severely damaging the zeppelin-like craft that Pasternak was building. The experimental ship, named the Aeroscraft, was planned as a gigantic air freighter that could carry heavy cargo to the remotest parts of the world.

“It was more than disappointing,” Pasternak said of the Oct. 7, 2013, accident as the crowd began to disperse after drinking sparkling apple cider beneath the company’s most recently constructed craft, the Aeros 40D Sky Dragon, which resembles a smaller version of the Goodyear blimp. “You become delusional.”

The newly dedicated craft is what Pasternak calls “a side project of the dream” — which he has not given up.

In fact, he says, he plans to build not just a bigger model of the experimental air freighter, which was nearly the size of a football field, but an entire fleet.

At the ceremony, speakers focused mostly on the company’s more modest product line: the blimp-like craft that it is selling for advertising, tourism or to be equipped with cameras and other equipment for surveillance.

Representatives from the Mexican consulate attended the event to celebrate the sale of the Aeros 40D to Grupo Toyan, a company that plans to use it to monitor oil pipelines.

Worldwide Aeros earlier sold a similar airship to the government of Thailand, where the military has used it for surveillance, company spokeswoman Sarah Hollins said.

But Pasternak has long had a grander vision. Trained as a civil engineer, he emigrated to the U.S. in 1993, determined to start a company that would one day build cargo-hauling airships.

In 2005, he got a break when he won a $3-million contract from the Pentagon to design a craft that could carry tons of supplies and heavy equipment to isolated battlefields.

He later received an additional $50 million from the government to build and test the experimental air freighter, allowing him to grow the company to more than 100 employees.

That now battered ship, ruined by the fallen roof, is being dismantled, his staff said. Employees recently determined that it was not repairable.

To continue the project, Worldwide Aeros is seeking money from private investors to build a fleet of 24 Aeroscrafts.

Pasternak said he plans to lease the ships to companies, governments, militaries and other customers around the world that need to carry as much as 250 tons of cargo to places where there are no trains and jumbo jets can’t land.

“Yes, we need money,” he said, when asked how he would pay for the production of the fleet. “It’s only in the comic books that you don’t need money to change the world.”