Posted on October 26, 2014 by LighterThanAirSociety

A national hot air balloon competition has lifted off in Central China’s city of Wuhan. Over 60 teams, and 200 individuals have participated, and the winners will form a national team to compete for China at international events.

A national hot air balloon competition has lifted off in Central China’s city of Wuhan.
Photo courtesy of cntv.cn

Popular in developed countries for some time, over 20,000 hot-air balloon competitions are held annually around the world. The US, France, and Japan have long stood out in the sport. Hot air ballooning began to catch on in China around 1985.

The site of this year’s national competition is perfectly located near a mountain and a lake, in the Mulan grassland on the outskirts of Hubei’s capital Wuhan.

“Mulan grassland is the ideal spot for the event for two reasons. First is the suitable weather condition. The hot air balloon is pushed by the wind. Mulan grassland in Hubei is close to the Dabie mountain area where the wind blows steadily. This is good for the hot air balloon. Second, there are many hills surrounding the area. We can get a fantastic bird’s eye view of the rise and fall of the hills below,” Li Yonghun, hot air balloon coach said.

This year witnesses the second hosting of the hot air balloon competition in Hubei. The organizer hopes that the spectacular event will promote China as well as the sport itself.

“Last year, we held the event in Hongan, with 30 teams participating. The event was quite a show. This year, we have 60 teams, twice that of last year. We hoped this event would honor the 65th birthday of our motherland. In the future, we hope to hold such large-scale hot-air balloon competitions around the country and even compete in the international arena. It is our dream to promote China to the world through this event,” Qin Yong, Hongan Creative Agriculture Dev’t Co., said.

During the four day event, over 200 people will take part in 26 competitive games chosen by the International Aviation Sports Association. The six best competitors will form the national hot air balloon team. This team will go on to enter the World Hot Air Balloon Championship, the World Challenge Balloon Championship and the American World Hot Air Balloon Open. The organizer hopes to hold such events annually in China to popularize the sport. 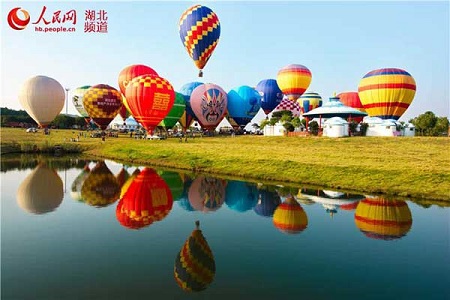 Over 60 teams, and 200 individuals have participated, and the winners will form a national team to compete for China at international events.
Photo courtesy of hb.people.cn