Posted on September 3, 2013 by LighterThanAirSociety 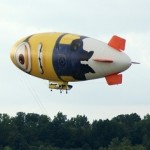 This afternoon the ‘Despicablimp’ was seen flying over the Akron and Cleveland region.

The airship a Van Wagner A-150 Lightship is decorated as a minion and is used to promote the Despicable Me 2 movie. The airship is moored next to the historic Airdock near the Akron Fulton Airport. The ‘Despicablimp’ will be in the area through next Sunday. 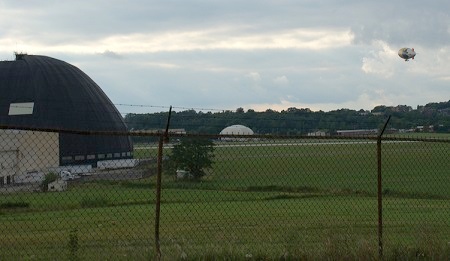 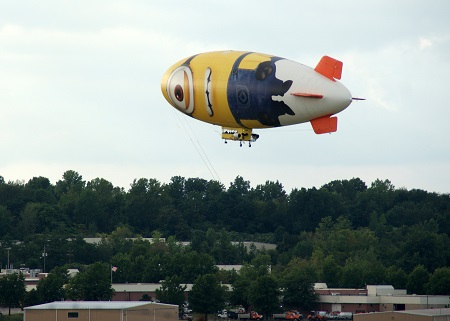 The Akron Beacon Journal covered the event as follows”

Even the most jaded Akron blimp watcher may have done a double take when gazing skyward this week. 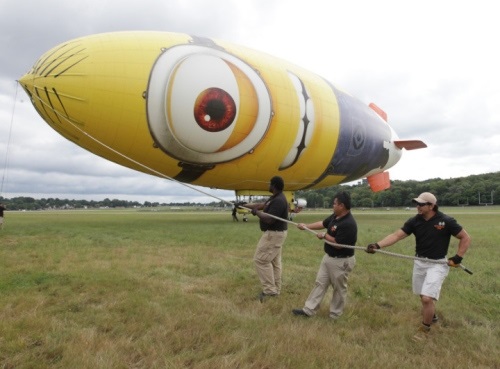 Soaring overhead since Monday has been the “Despicablimp,” a blimp decked out not with a famous tire company’s name but the big-eyed yellow-and-blue image of a minion. It will continue to be on view through Sunday. 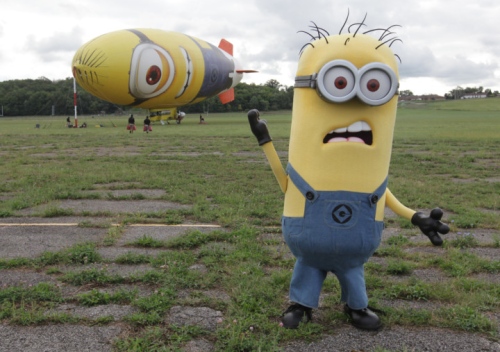 Minions, in case there’s no child in your household to explain, are creatures working for Gru, a character voiced by Steve Carell in the animated movies Despicable Me and Despicable Me 2.

Since mid-March, before the second movie premiered, the airship began crisscrossing the country to promote the film. Not that Despicable Me 2 needed much help: According to Box Office Mojo, the much admired movie has taken in more than $355 million at the U.S. box office, making it the second-highest-grossing film of 2013 behind only Iron Man 3. Its worldwide take is more than $823 million. 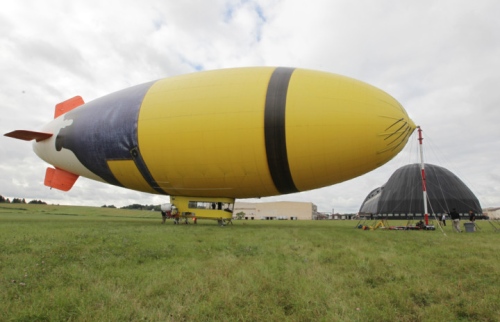 And the 165-foot, nine-passenger-plus-pilot vessel was a draw to representatives of local media offered not only close-up looks, but also ride-alongs from a field at the Akron Airdock site to up, up and away over downtown Akron, the Firestone golf course and other sights.

The blimp came from outdoor-advertising firm Van Wagner Communications. In 2012, Van Wagner acquired blimp-advertising operator the Lightship Group and the American Blimp Corp. (ABC), designer and manufacturer of Lightship model blimps, including the one decorated as the Despicablimp. 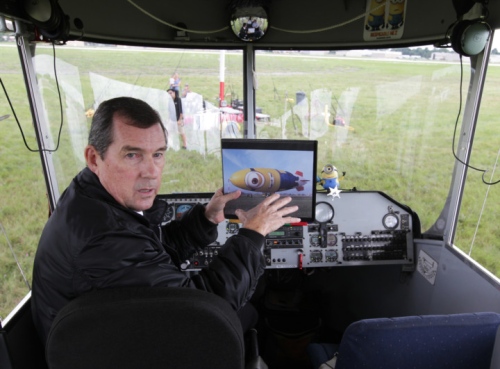 Pilot Allan Judd offered a primer on blimp travel and occasionally blasted the airship’s whistle to catch the attention of people on the ground. They had plenty of time to look up, too. While the Van Wagner website says this blimp has a cruising speed of about 40 knots, or 46 mph, on an occasionally breezy Tuesday morning Judd kept it a bit slower.

Judd’s background before blimps is in aviation and oceanography, and he found a combination of both when he stepped on his first blimp in 1984.

“This is really not flying,” he said, comparing it more to traveling in “an ocean of air.”

“And where boats cruise on the top of the ocean, we’re in it. We’re going diving. Think of a fish in an aquarium. That’s what we are.” 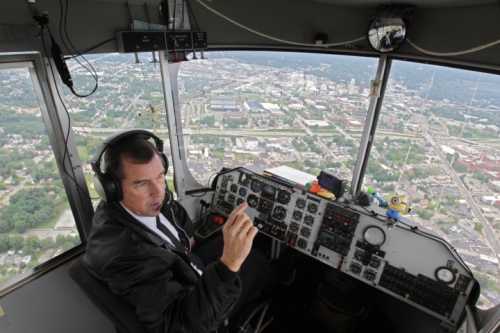 For various companies he has flown blimps advertising Shamu the whale, the Weather Channel, DirecTV, Brut cologne, Russell Stover candies, MetLife and other businesses. But he said the Despicablimp has been the most fun. He joked that he had discovered thousands of members of the “Parker” family — people who would abruptly park on the side of a road, or in one case just stop in the middle, in order to get a glimpse and possibly a photo of the flying minion.

While he said he could see the minion trips continuing indefinitely — after all, the movie is still in theaters, and a date for the DVD and Blu-ray release is not yet known — travel from coast to coast can take weeks. High winds and other conditions can also delay it; the blimp left its previous stop, Chicago, for Akron a day later than planned because of weather concerns. 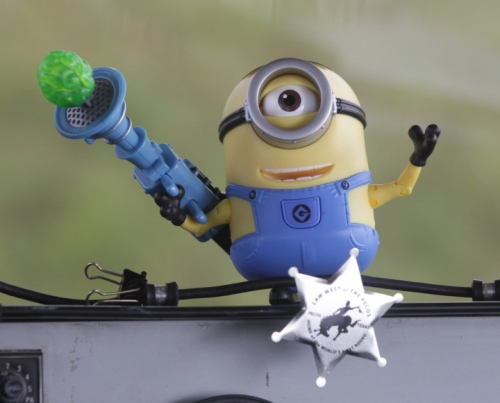 A minion on the dashboard of the Despicablimp. hoto: Phil Masturzo – Akron Beacon Journal

With a 220-gallon fuel tank, the blimp can travel 22 hours before refueling, Judd said. But it travels with about a dozen people in the ground crew and vehicles carrying equipment needed for landing and takeoff; Akron was rare in having a made-for-blimps location. So it usually flies eight to 10 hours a day, covering roughly 250 miles.

Judd can get up and stretch briefly during flights. But, since you don’t just pull a blimp into a rest stop, he always has what he calls “a pilot receptacle” handy.
Source: Akron Beacon Journal

This entry was posted in Uncategorized and tagged A-150, Airdock, Despicable Me 2, Despicablimp, Lightship. Bookmark the permalink.